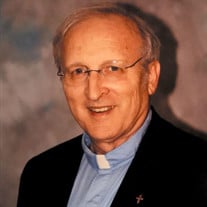 The Rev. Paul Davin Mayerhoff, age 77, was born May 25, 1944, in Fort Worth, Texas, and went to be with his Savior on August 14, 2021, in Grapevine, Texas. Paul was born to Herman and LaVerne Mayerhoff (Hoskins) in Ft. Worth, Texas. Paul was baptized into the faith at Zion Lutheran Church, Ft. Worth, TX, on January 21, 1945, and was confirmed in that faith on April 14, 1957.He attended Fort Worth Carter Riverside High School and graduated in 1962 from Bryan Adams High School in Dallas. After high school, he attended Southern Methodist University and graduated in 1966. Post university, he attended Concordia Theological Seminary, Springfield, Illinois, graduating in 1970. On August 26, 1967, he married Carol Hafer in an evening ceremony at Trinity Lutheran Church in Dallas, Texas. He was ordained as a minister of the Gospel on June 14, 1970 and served 5 churches in his 42 years of ministry. He served at Redeemer Lutheran Church in Baker, Louisiana, Trinity Lutheran Church in Monroe, Louisiana, and was the founding Pastor at Christ the Servant Lutheran in West Monroe, Louisiana. He was Senior pastor at Atonement Lutheran Church in Metairie, Louisiana, and the founding Pastor of Shepherd of Peace Lutheran Church in Maumelle, Arkansas, from where he retired in 2012. He served as District Evangelism Chairman in the Southern District of the Lutheran Church Missouri Synod. Paul was an active member of the Baker Jaycees and held several offices in the organization. Later, he was a long-time member of the Maumelle Rotary Club and was named a Paul Harris Fellow. He was a dedicated Chaplain at the Maumelle, Police and Fire Department in Maumelle, AR, ministering to the police and firefighters as well as affected citizens. Teaching about the Bible was his passion, and he held countless classes for church and community members. He was preceded in death by his parents, Herman and LaVerne Mayerhoff, his sister, Marilyn Ternan, and a granddaughter, Abigail Zoch. Rev. Mayerhoff is survived by his loving wife, Carol Hafer; three dear children and their spouses; Wendy (Tim) Zoch of Keller, Christina (Bill) Ruby of Elm Springs, Arkansas, and Davin (Colleen) Mayerhoff of Dallas; and eight living grandchildren; Andrew and Naomi Zoch, Jacob and Eli Ruby, Henry, Mary, Burke, and Francis Mayerhoff; a brother, Mark (Lauren) Mayerhoff of Glen Ellyn, Illinois and one brother-in-law, Tim (Frances) Hafer of Dallas. A visitation will be held at 1:30 pm, Friday, August 27, 2021, at Living Word Lutheran Church, 2031 W. NW Hwy., Grapevine, Texas 76051 followed by the Funeral Service in the same location at 3:00 pm. In lieu of flowers, donations may be made to Living Word Lutheran Church https://www.lwlc.com/worship/online-giving/ or Tarrant County Meals on Wheels, https://mealsonwheels.org/donate/. The family requests that all guests wear masks to the visitation and the service.

Family request all guests wear masks to the visitation and service.

Send flowers to the Mayerhoff family.