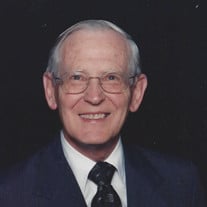 Paul Ernst died on January 18, 2022, at the age of 95. He was born to Chester and Olive Ernst on August 28, 1926, on a farm in Caldwell, Ohio. Paul was irrepressibly gregarious. You would always find him talking to someone -- even to strangers, to the horror of the introverts in his family. His passion was traveling. He made dozens of international trips, including doing Volksmarches on all 7 continents. He was involved with the Boy Scouts for over 80 years, from being a scout, to being one of the youngest scoutmasters in the BSA's history, to volunteering for decades afterward. He was proud when his two sons received their Eagle Scout badges in a joint ceremony. Paul also worked for the Boy Scouts for over 40 years, working his way up to Director of Registration. He was an innovator: an early proponent of computerization, treating women equally, and flexible hours. He used those flexible hours to watch his sons' ball games. Paul was a lifelong Methodist. Christianity was an important part of his life, and he was an enthusiastic participant in church activities. He met his future wife Carolyn because he was the church treasurer and she was the daughter of the chairman of the finance committee, whom he made excuses to visit. The guiding principle of Paul's life was service. After retiring, he took up volunteering full-time, and he was quickly recognized as Grapevine's Volunteer of the Year. He was the president of the Grapevine Historical Society; curator of the Grapevine Historical Museum; treasurer and auditor for the Grapevine Garden Club; taught Defensive Driving and trained other teachers; tax aide for AARP; ushered at Bass Hall; was a docent at the National Scout Museum and the Cotton Belt Depot Museum; committees at First United Methodist Church of Grapevine; worked at Grapevine city festivals; camp inspector for the Cub Scouts, etc., etc., etc. He didn't just take leadership positions, but was often found doing the dirty work like washing dishes and cleaning grounds. Paul leaves behind his wife Carolyn; sons David and Michael; and grandchildren Matthew, Maeve, and Silas. A Memorial Service will be held to celebrate Paul's life on Saturday, January 22 at 11:00 am at First United Methodist Church Grapevine, TX. In lieu of flowers, you may make memorial donations to the Endowment Fund at FUMC Grapevine at: www.firstmethodistgrapevine.org/give Or to the Longhorn Council of the Boy Scouts of America at: https://www.longhorncouncil.org/home/support-scouting/

Paul Ernst died on January 18, 2022, at the age of 95. He was born to Chester and Olive Ernst on August 28, 1926, on a farm in Caldwell, Ohio. Paul was irrepressibly gregarious. You would always find him talking to someone -- even to strangers,... View Obituary & Service Information

The family of Paul Irvin Ernst created this Life Tributes page to make it easy to share your memories.

Send flowers to the Ernst family.