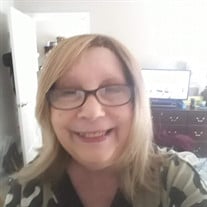 Patricia Ann Glisson (Williams) passed away on May 19th, 2022 at home, comforted by her devoted husband Scott F. Glisson and her loving nephew Branden P. Williams after 4 years fighting a long, arduous battle with pancreatic cancer. She was born on March 17th, 1957 in Lindenwold, New Jersey, and was one of four children (John Williams, Richard Williams, and Karen Williams) born to John Williams and Dolores Williams. Patricia had a deep bond with her younger sister Karen, and when Karen passed away in 2007, Patricia took in Karen’s 7-year old son Branden, without hesitation, and lovingly raised him as her own son. She was also a doting step-mother to Stirling Kincannon, whom she loved deeply. She was incredibly proud of both Branden and Stirling and never missed an opportunity to share their accomplishments with others. In 2014, on a trip to New Jersey, Patricia met the love of her life and soulmate, Scott F. Glisson, and they married in 2017. There was never a dull moment between the two of them and Scott never left her side throughout her illness. Patricia always put others first. People were drawn to her kind, authentic and loving soul. She had a light that shined brightly and overflowed with warmth. Her friends, family, and dogs knew they were cherished and loved. She loved having a house full of people and the house was often filled with the sounds of laughter. She was passionate about photography, supporting small businesses, crafting, and giving back. Despite fighting her own battle with cancer, Pat gave back to others by making beautiful wreaths and donating the proceeds to PanCAN (Pancreatic Cancer Action Network) and the Dawn Hill Fight Foundation. Patricia’s Celebration of Life service is Wednesday, May 25, 2022, at Lucas Funeral Home in Keller. In lieu of flowers, the family requests donations be made in Patricia’s name to PanCAN or The Dawn Hill Fight Foundation.

Patricia Ann Glisson (Williams) passed away on May 19th, 2022 at home, comforted by her devoted husband Scott F. Glisson and her loving nephew Branden P. Williams after 4 years fighting a long, arduous battle with pancreatic cancer. She was... View Obituary & Service Information

The family of Patricia Ann Glisson created this Life Tributes page to make it easy to share your memories.

Send flowers to the Glisson family.