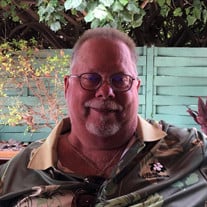 A Celebration of Life will be held for Norman Brian Lockwood at 12:00 noon on Friday, September 17, 2021, at Lucas Funeral Home, 1321 Precinct Line Road, Hurst, TX 76053. A reception will follow immediately afterwards at Rolling Hills Country Club in Arlington, TX. Norm was born on October 23, 1959, in Detroit, MI to Mr. and Mrs. Gerald Lockwood. He passed into the arms of our Lord, Jesus Christ on August 20, 2021, at 61 years of age. Norm grew up in Dearborn, MI. He graduated from Dearborn High School in 1977, where he was active in many sports, especially football and track, each of which he lettered in during his Jr year. Upon his graduation from Western Michigan University in 1982 with a degree in Print Management, Norm moved to Dallas, Texas in search of employment opportunities. He landed a job with Taylor Publishing and worked in various positions at this company for the entirety of his career until he retired in 2007. While at Taylor Publishing, Norm held positions in both Dallas, TX and El Paso, TX. It was in El Paso that Norm met Patricia (Pat) Fortner, who became his wife on June 15, 1991. Norm and Pat lived in the DFW area after their marriage, most recently in Grand Prairie. Norm and Pat loved to play golf, travel, and raise their pound puppies. Norm’s interest in golf became his passion. He dearly loved to play golf with his buddies at Rolling Hills Country Club in Arlington. Norm is survived by his wife Pat, of Grand Prairie, his father Gerald Lockwood of West Bloomfield, MI, his brother and sister-in-law Dave and Jody Lockwood, also of West Bloomfield, his niece Katie and nephew Ethan, also of Michigan and many, many cousins. Norm was preceded in death by his mother, Mrs. Ann Lockwood. Norm was loved by many and will be greatly missed. For those unable to attend the service at the Funeral Home, you may view the event via livestreaming by accessing the link below: https://video.ibm.com/channel/23847896/video/08qkg7 In lieu of flowers, please consider a donation in memory of Norm Lockwood to: Friends of Dallas Animal Services 3333 Lee Parkway, Suite 600 Dallas, TX 75219 This is where Norm and Pat adopted their most recent pound puppy, Banjo.

A Celebration of Life will be held for Norman Brian Lockwood...

Send flowers to the Lockwood family.