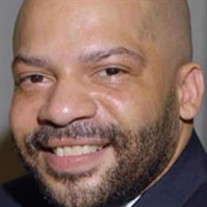 Norman St Clair Donatien Junior was born in Brooklyn on a cold winter’s day on February 26, 1969. His Mother Caroline Zuniga was born in Guatemala and his Father Norman St Clair Donatien Senior was born in Trinidad, but raised in Harlem during the tail end of the great renaissance. Norman Junior grew up at 884 Park Place, 901 Washington Ave and finally 214 Kingston Ave – All Brooklyn, all the way. He attended Kindergarten at St Mary’s Catholic School in the Canal Zone in Panama. By the time he came back to the USA, he was ready for 2nd grade and attended McAlpine Catholic School in Brooklyn where he met his first best friend and brother, Terrell. Elementary School was uneventful and then came Aviation High School – his dream was to be a pilot and I suppose his love of handling big machines at crazy speeds was born…anyone who has ever been in a car with Norman knows that he is really flying a plane. After High school came a time of self discovery and his Friends in the neighborhood Matt, Pete, Larry, Errol, Kaymel, Brother Rob, JP and Slice – Norm was relentless in his pursuit to find the meaning and purpose in his life – he tried new things, read all sorts of books, found adventure and friendship along the way. He wanted to be rich because money meant wealth, power and freedom and not having to take orders – so it wasn’t the money he was after but the means to do what he wanted to do. He could have been a hustler or a lawyer, equally comfortable in both worlds if he wanted. He tried his hand at a variety of things, but he found the music business might present opportunities to be his own man so he jumped into learning all areas: marketing, promotions, managing, DJing, throwing parties, selling mixed tapes – even wanted to get into radio – saw the game, understood the game and then turned his back on the game. He sought higher aspirations. He had money and many of the trappings that he thought would make him happy. Then he decided just to get a job - not exactly rocket science, but it would give him the freedom to live his life, the way he wanted. He met people, helped people, loved people and let people be who they were meant to be – he was argumentative, but didn’t hold grudges, he was opinionated, but did force you to believe his opinion, he was loud, because the music industry destroyed some of his hearing, he was insightful and confusing when delivering his philosophies. He was a good provider, but he would spend money to enjoy life and pay the rent later. He was a teacher, always He was young and old at the same time. He was fearless, but never foolish. He settled in at HMS relatively early on in his life and worked there all his life over 20 years. While he was not flying a plane, or being a big player in the music industry, nor did he make first million by the time he was 25. He became a well-known Philosopher in his own circles, he had a full and action packed 52 years and ultimately, he also became an incredibly wealthy person, not in monetary goods, but in an intangible, immeasurable way. He met his wife at that job, they built a wonderful married life that bore the fruit of their love in NJ and Nicky. Norm found peace and contentment in being a devoted son, a helpful grandson, a cherished husband, a loving father, a respectful step father, a tolerant big brother, an uncle with great advice, a loyal friend, a dedicated employee, a good neighbor and none of those things were based in money, power, wealth or fame – yet still his wealth of character, love of family, dedicated friendships, added to all the lives he touched in a positive way and if we could add a value to that - would priceless be a good number? Norm lives on in his loving wife Natalie Carr Donatien, his precious Son Norman St Clair III, his daughter Nicollette Carr. His Mother Caroline Zuniga, his Brother in law Paul Taylor, his sisters Sandra Taylor, April Donatien and Bridgette Donatien, his nephews Malik Donatien and Alphaeus Donatus, Caston Bey, his nieces Tarin Donatien and Tiffany Belcher, his Mother In Law Yolande Shepherd, his Sister in Law Simone Carr-Williams, his Brothers in Arms: Terrell, Errol, Pete, Marvin, JP, Slice, Tony, Kaymel, Robert, Bobby-Rob, Kenny, Neil, Larry, Bernard, Lou…..if I missed your name please forgive me, but Norm knows who you all are. Noman St Clair Donatien Jr fell asleep peacefully on July 2nd 2021. Thank you for being a part of this celebration and his life. Click here to watch the Recorded Service.

The family of Norman St. Clair Donatien Jr. created this Life Tributes page to make it easy to share your memories.

Norman St Clair Donatien Junior was born in Brooklyn on a cold...

Send flowers to the Donatien family.