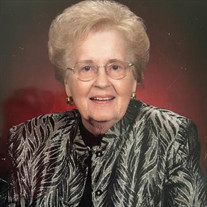 Norma Jean Emler, passed away in Bedford, Texas on April 2, 2022 at the age of 96. She had been married to Buford Emler, a high school teacher and football coach, for 54 years. Norma was the eleventh of 12 children born to Elie and Inez Lam in 1925 in Tahoka, Texas. In spite of their humble circumstances, all of the grown Lam children graduated from college as did Norma from Texas Tech University in 1945 with a teaching degree. Buford and Norma Emler married in June of 1949 and remained living and teaching in Denver City, Texas for 26 years. Norma taught history in middle school and Buford taught and coached in Denver City High School. They had one child, Dave Emler, and lived next door to Norma’s parents whom they cared for until the death of her parents. Norma and Buford along with Dave were very involved in the First United Methodist Church in Denver City. Each of them professed their faith in God through Jesus Christ and sought to serve God in and outside their church. In 1976, Norma and Buford left Denver City to teach and coach in Clarksville, Texas and finally in Paris, Texas where they both retired in 1989. While in Paris, they survived the devastation of a killer tornado. After retirement, they moved to Good Samaritan Village in Denton, Texas, where together, they received many honors for their hospice volunteer efforts and spent many wonderful days fishing. Buford passed away in 2003 and after 30 years in Denton, Norma moved to her last residence, Heartis Senior Living (Bedford), in 2019. She was blessed with many wonderful friends at each stop along the way. Known for her joyful and gentle disposition, Norma made a habit out of never talking badly about anyone. She was a reliable prayer partner and a Christ-like example to all who knew her. An excellent cook, Norma also was an avid, and lucky fisherwoman. She was also a wicked Rummykub player and typically won in most board games. Norma was preceded in death by her husband Buford Emler and all of her brothers and sisters. She was the last surviving member of the Lam family from her generation. She adored all her siblings but was especially close to two sisters…Margaret Fulton of Lubbock, Texas and Gwen Lam of New York City, New York. No doubt the three sisters are celebrating a happy reunion in Heaven today, along with her husband, Buford. Listing just a few of the many friends and large extended family who adored Norma, she is survived by her son, Dave Emler and his wife Jan Emler; three grandchildren, Paige Boyett (Colleyville), Tyler Emler and his wife Holly (Ft. Worth), Katie Gall and her husband Chris (Nashville). Also surviving are nine great grandchildren; Joshua, Leo, Ava, Willian, Beau, Riverlea, Bennett, Carter, and Gigi. Additionally, Norma is survived by three special nieces and one nephew who treated her like their own mother…Gwen Dudley, Sandra Nelson, and Deanie & Terry Kepler. In lieu of flowers contributions may be made to the Ukrainian relief effort through the Samaritans Purse.

Norma Jean Emler, passed away in Bedford, Texas on April 2, 2022 at the age of 96. She had been married to Buford Emler, a high school teacher and football coach, for 54 years. Norma was the eleventh of 12 children born to Elie and Inez Lam... View Obituary & Service Information

The family of Norma Jean Emler created this Life Tributes page to make it easy to share your memories.

Send flowers to the Emler family.