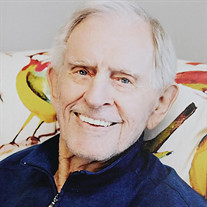 Neill Ford Armstrong was born on March 9, 1926 in Tishomingo Oklahoma and passed peacefully surrounded by family on August 10, 2016 in Trophy Club, Texas. Born the first child of Forrest and Essie, Neill had an idyllic childhood in Tishomingo. Upon graduation, he headed up the road to Oklahoma A&M where he lettered in football, basketball and track and field. It was there he met and married the love of his life, Jane Ellen Coffee. Neill was a first-round pick of the Philadelphia Eagles in 1947 and played on back to back World Championship teams in 1948 and ‘49. Following his five year career with the Eagles, Neill played for three seasons with the Winnipeg Blue Bombers of the Canadian Football league before retiring at the age of 28 to pursue a career in coaching. His first stop was as an assistant coach at his alma mater. That was followed by two years with the Houston Oilers of the neophyte American Football League before heading back to Canada in 1964, where he assumed the position of Head Coach of the Edmonton Eskimos. Six years later Neill rejoined his old Eagles and Blue Bombers teammate, Bud Grant, with the Minnesota Vikings. He spent seven great seasons as defensive coordinator of the legendary “Purple People Eaters.” It was during this era he created the ballyhooed “46 Defense.” In 1978 he departed Minnesota to take over as Head Coach of the Chicago Bears. Neill enjoyed this position for four years before accepting an offer from Tom Landry to join his staff with the Dallas Cowboys. He retired from Jimmy Johnson’s staff in 1990, but was asked to remain as a consultant. Neill was “in the booth” for three Super Bowl victories while in that role. All told, he coached in seven Super Bowls and worked for three Hall of Fame coaches. In his retirement Neill enjoyed golf, spending time with his grandchildren and, most of all, living each precious day with his beloved Jane. Howard Cosell once remarked on Monday Night Football that Neill was “Lincoln-esque.” Those of us who knew him could only agree, though he would be too humble to accept such praise. Neill was a man of high moral standard, great ethics and impeccable social comportment; no one was his lesser and he treated everyone with respect. Neill truly was a champion of a man. He will be remembered as a devoted husband, devout Christian and uncommon father. His love and respect for his family knew no bounds. He was proud of his three children, eight grandchildren and four great grand-daughters. The family would like to give special thanks for the kind, loving care provided by Heaven At Home and New Century Hospice. Neill is survived by his wife of 70 years, Jane, sister Mary Lou (Tom Black), sons Neill Jr. (Jody), David (Janie), and daughter Gail (Joe) followed by an extensive and loving family reaching around the world. He did not go to the moon. Memorial Service: A memorial service will be held at 3 p.m., Saturday, August 20 at Fellowship United Methodist Church, 101 Trophy Club Dr., Trophy Club, TX 76262. In lieu of flowers, the family kindly asks that donations be made to 6 Stones, 209 N. Industrial Blvd. Suite 241, Bedford, TX 76021.

Neill Ford Armstrong was born on March 9, 1926 in Tishomingo Oklahoma and passed peacefully surrounded by family on August 10, 2016 in Trophy Club, Texas. Born the first child of Forrest and Essie, Neill had an idyllic childhood in Tishomingo.... View Obituary & Service Information

The family of Neill Ford Armstrong created this Life Tributes page to make it easy to share your memories.