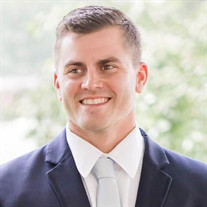 Nathan Richard Wesley Burke of Fort Worth, Texas passed away Tuesday, April 13, 2021 in Pensacola, Florida. Loving son, brother, grandson, nephew, friend, colleague, and shipmate. Born in Bethlehem, PA on September 5, 1990 to Kevin and Darla (Davis) Burke Nathan began playing sports at the age of 4 and continued through high school. His favorite sport was football but he also played baseball and basketball. He was a member of Wilson High Schools’ 2006 state championship team. His passion for sports drove him to Texas Tech University where he earned his bachelor’s and master’s degrees in Kinesiology. Nathan loved training athletes for strength, performance and watching them improve over time. He freely shared his talents and expertise with the student athletes of Texas Tech and Coronado High School. Arguably, more important to Nathan than training, was being a leader and mentor in all aspects of life, including faith and ethics. Nathan’s faith was paramount in his decision to enlist in the United States Navy as a rescue swimmer. He was qualified to enter as an officer, but felt compelled by God to serve and sacrifice in a more physical contribution. Soon after beginning boot camp, Nathan was reaffirmed of the importance of the path he had taken, and felt confident that he was following the path God had laid out for his life. His leadership and mentorship roles were ignited by the need of Nathan’s peers to hear words of encouragement and hope. He joyfully accepted this charge and unapologetically shared his faith in daily discussions and by reading scripture to his teams. Nathan epitomized what, as Christians, we are called to be: “A light in a dark world”. Nathan is survived by: Mother and Father, Darla and Kevin Burke of Fort Worth, TX; Sister, Elizabeth (Burke) O’Beirne of Keller TX, Brother, Jacob Burke of Arlington, TX Grandparents, Richard and Sue Davis of Lubbock TX Grandmother, Eleanor Burke of Martins Creek, PA Grandparents, Ted and Janet Achuff of Hellertown, PA and several Aunts, Uncles, and Cousins. In Lieu of flowers, donations may be made to the Team Burke Scholarship Fund Coronado High School 4910 29th Drive Lubbock, TX 79410, Unbound North Texas: https://unboundnorthtexas.org/, or Knights of Columbus Council 759.

The family of Nathan Richard Wesley Burke created this Life Tributes page to make it easy to share your memories.

Nathan Richard Wesley Burke of Fort Worth, Texas passed away...