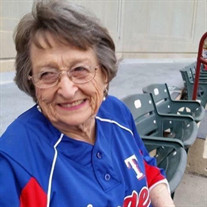 Mozelle Fuller Proffitt passed away peacefully in her home in Fort Worth on Monday, January 24 after a short illness. She was 89 years old. There will be a visitation on Friday, January 28 from 6-8 pm Lucas Funeral Home 1601 South Main Street Keller, TX 76248. Her “celebration of a life well lived” will be on Saturday, January 29 at 11am at Alliance Community Fellowship 2185 Golden Heights Road Fort Worth, TX 76177 with a graveside service following at 3:30 pm at Fairy Cemetery in Fairy, TX Mozelle was born in Cleburne, TX to James A. and Bessie Prater Fuller on June 19, 1932. Early on they lived on the farm near Hillsboro until moving to Fort Worth after the start of WWII where her mom and dad got jobs to help the war effort. She attended Ridglea Baptist Church where she played the violin for services. She graduated from Technical High School before marrying the love of her life Bobby Jack Proffitt on June 19, 1949, her 17th birthday. Early in the marriage she worked as a beautician until welcoming Gary Allen in December of 1950. She became a stay-at-home mom and later welcomed Jana Kay in June of 1959 and Cynthia Gay in Oct of 1961. Bob worked as a dental technician for many years and when he started his own dental lab, Mozelle did most of the legwork and the bookkeeping. In 1972, Bob became the pastor of Latter Rain Baptist Church in Keller. Mozelle loved the role of pastor's wife, and she was very active in VBS and other ministries. They made many lifelong friends through the church until they moved to Pittsburg, TX in 1986 for a slower paced life. There they enjoyed a wonderful life until Bob’s death in May of 2013. It was then that Mozelle moved back to Fort Worth to be near her daughters. She thrived in a wonderful independent living facility. She never stopped missing Bob, but she carried on with grace and the faith that she would see him again. “Though she be but little she is fierce”. Mozelle was small in stature, but she was big in personality and heart. If she loved you, she loved you fiercely...especially her family. She was very social and absolutely loved to talk. If you were around her at all you were sure to hear stories of her family whether you wanted to or not. She was a force to be reckoned with, much to the dismay of her more reserved family members. Her faith and her love of the Lord was evident in her words and actions. She was also an avid fan of the Texas Rangers. She watched every game on tv that she could. She was thrilled to be chosen to be interviewed on the jumbotron at a Ranger game where she was a huge hit! She is preceded in death by her parents James and Bessie Fuller and her husband Bobby J Proffitt, daughter Cindy Proffitt Schuff, grandson Jordan David Renfro, and sister Dorothy McCracken. Left to cherish her sweet memory are son Gary Proffitt and wife Jerri Sue, daughter, Jana Proffitt Rogers and husband Charles, son in law Craig Schuff, sister Pat Roberts, Grandchildren Jake Proffitt (Misty), Erin Gaston (Erick), Amy Martinez (Trey), Joshua Renfro (Mayra), Justin Schuff (Taylor). Great Grandchildren Kaden, Kenley, and Drake Proffitt, Dakota Durfee, Trent & Harper Gaston, Naomi, John Mark, & Caleb Renfro, Mason & Molly Martinez, Finley & Axton Schuff. Numerous and beloved nieces and nephews. We would like to thank Discovery Village at Alliance and Pam Hasson for giving her many wonderful years in a warm, loving place that she loved to call home, Senior Adult Ministry at Alliance Community Fellowship, Klarus Hospice, and so many friends who were there to help us through her final days, namely Doreen Renfro, Louise Staley, Meredith Cordes, and Cody Bailey. In lieu of flowers the family suggests a donation to Senior Adult Ministry at ACF. A wife of noble character who can find? She is worth far more than rubies. Proverbs 31:10

Mozelle Fuller Proffitt passed away peacefully in her home in Fort Worth on Monday, January 24 after a short illness. She was 89 years old. There will be a visitation on Friday, January 28 from 6-8 pm Lucas Funeral Home 1601 South Main Street... View Obituary & Service Information

The family of Mozelle Fuller Proffitt created this Life Tributes page to make it easy to share your memories.

Mozelle Fuller Proffitt passed away peacefully in her home in...

Send flowers to the Proffitt family.