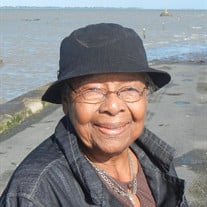 Millicent Louisa Atwell known by some as Dorothy and to others as Louisa or Darkie Was the third child of seven to Hillary Augustus Niles, from St Simons, St Andrew Barbados, a Laborer of Irish descent and Eletha Springer, of Brazilian/Indian descent, also of St Simms, St Andrew in Barbados She is survived by her daughter, Marion Atwell-Kermeur (known by many as Misty)/her husband Jacky Stepsons : Oshwin (Leroy) Evelyn/wife Pat and their family in Hamilton, Ontario, Canada Lester Weekes of St Philip, Barbados and Bermuda and Murton Weekes/wife Tamilya in Berkshire, UK Brothers: Cleon Springer- Deep River, CT Roy Niles, Roxbury, MA. And Chester Niles, Pittsfield, MA NUMEROUS GRANDCHILDREN and GREAT GRANDCHILDREN in The USA, Canada, UK, Luxembourg and Germany. Numerous Nieces and Nephews again in USA, UK and the CARIBBEAN GODSON and previous caregiver Andrew Roberts, in France and current Edward Ortiz in Euless, Texas Millicent arrived in the USA in the summer of 1966 as a Nanny and went on to work for Tiffany and Co In New York City in Quality Control until her retirement. She was known there for her work ethic and her Laughter. Mom was known for her laughter, her love of Life, her celebration in Christ. She started the first day of each year on page 1 of her bible and faithfully read and highlighted or made notes on ever page so that on 31Dec she was completely finishing off so that she could start it all over again. Mom’s greatest Love besides her Lord, was her daughter Marion (Misty) and their combined love of travel. Over the years they racked up many miles and many extension pages in passports. From Hearns Gems in the Brazilian mines or the flag stores in Rio de Janeiro, Brazil to trying to ride camels in Mongolia to going to the biggest mall in the world to satisfy her love of shopping and finding the best bargains which by the way she did, THE GRAND BAZAAR inside the walled city of Istanbul, Turkey Her laughter encompassed the world and everyone she met. On one of her many trips she fell. We had just returned from walking on the Great Wall of China, in Beijing after spending 8 days in Mongolia. This was her 85th birthday present trip. From sidewalk she went to go down a flight of stairs and decided to do the hard way, head first. Survived and walked the mile back to hotel then needed to call paramedics because we later learned she had damaged a nerve in her foot. To make a long story short, but the time they got her on the gurney into the elevator and into the hotel lobby, she had those 8 paramedics singing along with her to one of her favorite songs, Slow Boat to China. Mom brought out the smiles every where she went. If there is one saying that will be her legacy it will be, DON’T LET ANYONE STEAL YOUR JOY. She was preceded in death by: her husband Laurie Winslow Atwell, her stepsons Sherwood Sealy/Luxembourg and Henderson (Storm) Weekes formally of USA but was living in Barbados, her sisters Germaine Springer, Daisy Small, Geraldine And Othalease Niles, Brothers Joseph(Boy) Niles and Sonny and Eugene Niles. Social Distancing and Wearing of Masks are always required, even if Fully Vaccinated.

Millicent Louisa Atwell known by some as Dorothy and to others as Louisa or Darkie Was the third child of seven to Hillary Augustus Niles, from St Simons, St Andrew Barbados, a Laborer of Irish descent and Eletha Springer, of Brazilian/Indian... View Obituary & Service Information

Millicent Louisa Atwell known by some as Dorothy and to others...

Send flowers to the Atwell family.