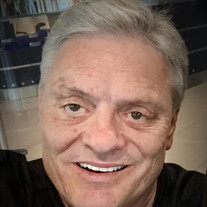 Micky Leach, age 73, passed away Sunday, April 3, 2022. Celebration of Life: 2:00 p.m. Monday at The Heartland Church. To watch Micky's Celebration of Life please join via live stream at the link above. Visitation: 2:00 p.m. - 5:00 p.m. Sunday at his home, 9009 Cumberland Dr. , Irving 75063 In lieu of flowers, expressions of sympathy may be made to Love and Life Missions of The Heartland Church at https://bit.ly/3NOH1FM or to The Great Flag Caper at P.O. Box 140992, Irving, TX 75014 Micky Leach was born March 8, 1949 in Knox County, Texas to Alton Leach and Floyce Reed Leach. He attended school in Plainview, Texas and graduated from Texas Tech University. In 1967, he married the love of his life, Nedra Magee. In 1969, they became parents to Jason Leach and moved with their baby to California. Ten years later, when living in Idaho, their daughter Tama Leach was born. Another twelve years later, when living in Seattle, Washington, Jessica Alexander was added to their family. They returned to Texas in 1998 where they have lived in Irving ever since. Micky’s early adult life was spent in the western part of the United States where he worked in various aspects of the construction industry. He loved music and played drums in a rock and roll band. He also worked successfully in auto sales. In 1998, Micky’s life took a distinct turn. He returned to Texas and began a 20 year career as a mortgage banker. Most importantly, he recommitted his life to Jesus Christ. His church became a center point of his community, consistently inviting others to join him. He enjoyed serving as a volunteer and board member of The Great Flag Caper. People were the most important part of his life. He had a unique gift for connecting with others, regardless of the situation. Micky was blessed with four granddaughters, Melissa, Carrie, Kaelynn and Tenley, and one great-grandson, Graham. His children and grandchildren were his pride and joy. Micky was preceded in death by his late parents and his sister, Suzy Leach. Survivors: Wife, Nedra Leach; Children, Jason Leach and wife Cindy, Tama Curlee and husband Dustin, Jessica Alexander; 4 granddaughters; 1 great-grandson; brother, Randy Leach; and numerous loving family and friends.

Send flowers to the Leach family.