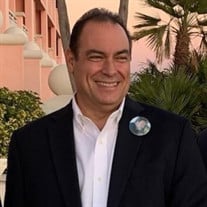 Michael Thomas Reagan, 61, passed away peacefully February 19, 2022 at his home after 13 months of a courageous battle with stage four pancreatic cancer. Michael battled his cancer the way he lived his life, with love, kindness, and strong conviction. His goal was to beat the beast so he could continue doing what he loved, spending time with his family. Michael was born on December 3, 1960 in Washington, DC and raised in Waldorf, Maryland. He graduated from the University of North Carolina at Charlotte with a Bachelors of Science in Mechanical Engineering and then graduated with a Masters of Business Administration from Auburn University. Michael started his career with General Motors in Lockport, NY (Harrison Radiator Division). He pioneered the offices in Asia Pacific for Delphi Automotive to expand in global opportunities. Michael and his family moved to Trophy Club, Texas in 2013 where he led an International team and became Vice President of Customer Experience at Bell Helicopter. Michael was a loving husband, father, son, and good friend to many. He strived to be the best leader and mentor to his family, friends and co-workers, Michael was a devout Catholic and attended mass regularly before his diagnosis. His passions included restoring antique trucks with his son, guiding his daughter through her mechanical engineering studies, gardening with his wife, and traveling. Michael was a lover of life and always had a sense of humor in every situation. Michael was preceded in death by his father Jessie C. Reagan, mother Antoinette Capone Reagan and brother Timothy Russell Reagan. He is survived by his wife of 28 years, Lisa Maria Pilato Reagan; his children, Christina Sharon Reagan and Michael Thomas Reagan Junior and numerous nieces, nephews. The viewing will be held on February 25, 2022 from 6-8 pm at Lucas Funeral Home at 1601 S Main St. Keller, TX 76248. The funeral will be held on February 26, 2022 at 10 am at Good Shepherd Catholic Church at 1000 Tinker Rd Colleyville, TX 76034.

Michael Thomas Reagan, 61, passed away peacefully February 19, 2022 at his home after 13 months of a courageous battle with stage four pancreatic cancer. Michael battled his cancer the way he lived his life, with love, kindness, and strong... View Obituary & Service Information

Send flowers to the Reagan family.