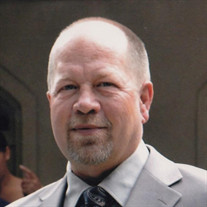 Michael Glenn Nix, age 63 of Bedford,TX passed away on October 09, 2021 peacefully in his sleep. He was born in Anniston, AL and moved to Texas shortly after his time in the Air Force. He was a beloved husband, father, papaw and lover of all... View Obituary & Service Information

The family of Michael Glenn Nix created this Life Tributes page to make it easy to share your memories.

Michael Glenn Nix, age 63 of Bedford,TX passed away on October...