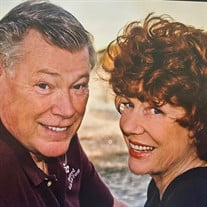 Michael “Mike” O’Doherty went to sit by his Lord and Savior on May 28th of 2021 at the age of 80 at his home in Fort Worth, Texas. Mike battled with some serious medical issues the past few years and now he suffers no more. Despite the pain, he fought like a hero and stayed strong until the end. Inurnment with full military honors: 1:30 p.m. Friday, July 2, 2021, in the Columbarium at Dallas - Fort Worth National Cemetery, 2000 Mountain Creek Parkway, Dallas. Michael was born in New York City to Irish immigrants Daniel and Anne Doherty. He grew up in Jamaica, New York and was the fifth child of ten. He’s is preceded in death by his parents; sisters, Eileen, Elizabeth, Mary, Lavinia, and brothers, Patrick and Jimmy. Michael is survived by his oldest brother, Danny Doherty, and younger brothers, Edward and John Doherty. Upon graduating from Catholic High School in New York he moved to Randolph AFB in San Antonio, Texas where he joined the Air Force. While serving at Randolph AFB he met the love of his life, Claudia Kay Johnson, it was love at first sight. Michael served in Vietnam in 1962 and 1966 and was a POW for a short period. Upon his return to his beautiful bride and together with their daughters Katie Kimberly and Kelly they travelled the world with assignments in Wiesbaden Germany, Okinawa Japan and various places in the U.S. He served his country faithfully for 23.5 years. Michael and Claudia were married for 56 incredible loving years. He leaves a legacy of eight grandchildren, Katie and David Snyder’s children Jessica, Michael, John Ryan and Mekenzie; Kimberly O’Doherty’s children Courtney and Ethan Pitcher; Kelly and Chris Leebelt’s children Tanner and Ashlyn. Michael’s wishes are not to have a service but to be inurnned in Dallas - Fort Worth National Cemetery with full military honors. Additionally, he requested in lieu of flowers please send donations to St Judes Children’s Hospital or a donation of your liking. His family thanks everyone for all the prayers and well wishes during this very difficult time. Matt 25:23 “Well done my good and faithful servant.” Mission complete.

The family of Michael "Mike" O'Doherty created this Life Tributes page to make it easy to share your memories.

Michael “Mike” O’Doherty went to sit by his Lord and Savior on...

Send flowers to the O'Doherty family.