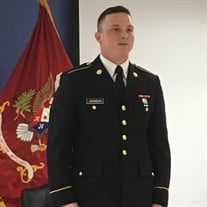 Michael Ashton Johnson, age 28, born December 3, 1992 in Fort Worth Texas and passed away October 4, 2021 in Fort Worth Texas. He was born to Carl Joseph Johnson and Michelle Barrett Johnson. Ashton graduated from Keller High School and was attending Tarrant County College studying Aviation Logistics. He proudly served his country in the United States Army where he was an Air Defense Specialist. He played hockey for the Dallas Junior Stars Select Hockey Team, became a licensed student pilot, a member of San Antonio X-Factor professional paintball team, was a competitive bodybuilder, and an avid country dancer extraordinaire . He loved aviation in general. He frequented his father’s hangar where they would just sit and talk airplanes and later go flying in the Stearman. More so, he enjoyed bringing his friends to share that experience. When he wasn’t cloud dancing, he was tearing up the dance floor at all the popular locales. Everyone that ever saw him instantly loved him and his natural ability to dance. Ashton will be remembered by so many people as he touched their lives and gave inspiration everywhere he went. Ashton is survived by his father, Carl Joseph Johnson and his wife Shelli; mother, Michelle Barrett Johnson and spouse, Jeremy Dean Allen; brother, Wesley Cagle Johnson; sister, Kaylee Lorraine Johnson; maternal grandparents, Michael and Debra Barrett, Phyllis Eidt Barrett and Nancie Haskett; paternal grandparents, Michael and Linda Summarell and many extended family and friends. Visitation will be held from 6 pm to 8 pm, Wednesday, October 13, 2021 at Lucas Funeral Home, 1601 South Main Street, Keller, Texas 76248. Final Resting Place will be Dallas Fort Worth National Cemetery. The Ashton Johnson Memorial Cloud Dancer Scholarship. Donations can be made to Venmo @CloudDancerScholarship (the 4 digit number is 0951). All military past and present please feel free to wear your uniform.

Michael Ashton Johnson, age 28, born December 3, 1992 in Fort Worth Texas and passed away October 4, 2021 in Fort Worth Texas. He was born to Carl Joseph Johnson and Michelle Barrett Johnson. Ashton graduated from Keller High School and was... View Obituary & Service Information

The family of Michael Ashton Johnson created this Life Tributes page to make it easy to share your memories.