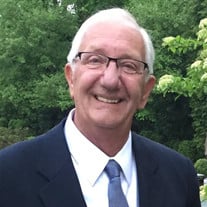 Michael W. Applequist, 72, of Bedford, Texas, passed away in Dallas on Sunday, April 18, 2021. Mike was born September 27, 1948 in Brooklyn, NY. Having grown up in Brooklyn and on Long Island, Mike enlisted in the U.S. Army out of high school in 1965. He proudly wore the green beret while serving as a Sergeant in the U.S. Army 7th Special Forces group through 1968. He joined the Suffolk County Police Department on Long Island in 1978, while attending and earning his bachelor’s degree in Criminal Justice from C.W. Post, Long Island University. As a Police Officer, he was assigned to the 2nd Precinct, Highway Patrol Bureau and Motor Carrier Safety Unit. Mike remained loyal and dedicated to the department and his brothers for 35 years. From 1994 to 2013, when he retired, he was honored to have been elected to serve the Suffolk County Police Benevolent Association and Board as a Delegate, Headquarters East Trustee, and Financial Secretary. Mike met Caroline Murchison on June 16, 1984 and they married six months later on Christmas Eve, December 24, 1984. They resided and raised two children, Scott and Kate, in Oyster Bay, NY until retiring to Texas in 2015. Mike deeply cherished his family, his friends and the memories he shared with them and under his tough cop exterior, was a man with a true heart of gold. He was a proud man, proud father, and proud American and loved nothing more than to lead every Memorial Day parade driving his Vietnam era military jeep. Mike was a Master Mason and long-standing member of the Matinecock Lodge in Oyster Bay and served as Trustee of the lodge for eight years. He had a magnetic personality and could light up a room with his presence. Honoring his Scottish heritage and with a scotch in hand, you could often find him donning his dress kilt while being the life of the party. Mike is survived by his wife, Caroline of Bedford, TX; son, M. Scott Applequist (Kelsey) of Dallas, TX; daughter, Kate Applequist of Bedford, TX, and his precious granddaughter, Ollie, daughter of Scott and Kelsey. He also leaves behind countless other family members who were near and dear to him and of course, his best buddy, Newman, one of his many Springer Spaniels. I choose to believe. I believe in the power of a calling. I believe in honor and sacrifice, in courage through the danger and strength through the struggle. I believe in hope. I believe in the power of will, in justice, in a new day, and in making a difference. I will never stop believing no matter what comes my way. Some may hate, others will turn a blind eye. There will be hurdles and risks. Loss of brothers and sisters and the challenge to keep going. No matter what confronts me, no matter the danger, I will keep my faith, my hope, and my courage. I am a defender and a peacekeeper. I am a sheepdog. The family requests those who wish to express sympathy to consider making a donation to either: Matinecock Lodge #806 F. & A.M, 14 West Main Street, Oyster Bay, NY. 11771 Special Forces Association, https://www.specialforcesassociation.org/donate/

Michael W. Applequist, 72, of Bedford, Texas, passed away in Dallas on Sunday, April 18, 2021. Mike was born September 27, 1948 in Brooklyn, NY. Having grown up in Brooklyn and on Long Island, Mike enlisted in the U.S. Army out of high school... View Obituary & Service Information

The family of Michael Warren Applequist created this Life Tributes page to make it easy to share your memories.

Send flowers to the Applequist family.