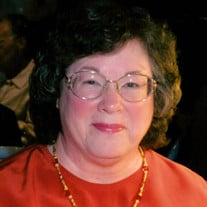 Mavourneen Alice Vujovich (O'Brien), June 18, 1940 - September 28, 2021. Mavourneen, 81, passed away in the presence of her loving children and grandson on Tuesday, September 28, 2021. Mavourneen was preceded in death by her husband Veljko, her mother Alice, her father Thomas, and her sister Shirley. She leaves behind her daughter Michele, son James, and grandson Keefe, her sister Patricia, and her brothers Thomas, William, and Joseph. Mavourneen was born in Denver, Colorado, the second of six children born to Kathryn Alice (Hart) O'Brien and Thomas Park O'Brien. She graduated from Cathedral High School in 1958 and from Colorado University, Boulder, in 1962, with a degree in Accounting. After graduation she moved to Los Angeles, California and began her career with the County of Los Angeles in September 1962 and served in the Auditor-Controller's Audit Division and the Finance Offices of the LAC+USC Medical Center, Department of Hospitals Administration, and Department of Health Services Administration. She was appointed Chief of the Program Reimbursement Division in 1979 and retired in 1996. Mavourneen met her husband, Veljko Vujovich, originally from Yugoslavia, in the produce section of a grocery store when he complimented her on the strawberries she had chosen. They were married a few months later on July 16, 1966. Their daughter Michele was born in 1969, and son James was born in 1971. Her husband Veljko passed away in 1981 after a short battle with leukemia. Michele's son Keefe, her only grandchild, was born in 1988 and was her constant companion after her retirement. She and James moved from her long-time home in Sherman Oaks, California, to her new home in Keller, Texas, in 2014, which was just a short walk from Michele's home and which allowed them all to spend time together in her final years. Mavourneen had a life-long passion for financial auditing, and even in retirement could found at her desk doing "paperwork". Year round, if we called her on the phone to find out what she was up to, her response was usually, "my taxes". She also loved gardening, making necklaces, and vintage trailer camping with Sisters on the Fly, a women's camping group, of which she remained Sister #1345 until her passing. She attended many camping events and monthly dinners with Michele at Sisters events both close to home and around the country, and she loved meeting new friends and exploring new places. One of her greatest joys, though, was visiting her sisters, brothers, nieces, nephews, cousins, and lifelong friends Rita and Ruth, and she would happily travel across the country for family reunions. Known affectionately by her grandson as "Dama", by her daughter as "Momma", and her son as "Moo", she was greatly loved and is greatly missed. Our lives will not be the same without her. A Funeral Mass for Mavourneen will be held Friday, October 8, 2021 at 10:30 a.m. at St. Elizabeth Ann Seton Catholic Church, 2016 Willis Lane, Keller, TX 76248, with Father James Flynn officiating. In lieu of flowers, the family requests donations be made to the Bunny Burrow Rabbit Rescue in Haltom City, Texas.

The family of Mavourneen Alice Vujovich created this Life Tributes page to make it easy to share your memories.

Send flowers to the Vujovich family.