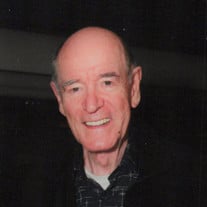 Maurice Henry Worsfold died peacefully at his home in Grapevine, Texas on October 11, 2021 after a short battle with lung cancer. He was born in Worthing, West Sussex, England on October 22, 1935 to Walter and Maud Worsfold. Maurice served in the Royal Air Force from 1954 to 1959 training as a Russian linguist. He was deployed in Iraq for part of his service. Maurice had a successful 30 year career at IBM working in the UK, Nigeria, Canada and the US, where he held executive positions prior to his retirement. He continued his career as the CFO of several companies in Russia, including Rosinter Restaurants Ltd, Clearwater Ltd. and VipelCom Ltd. He retired from full time employment in 2004 however he continued as a part time consultant for previous his employers for several years. Maurice is preceded in death by his second wife of 35 years, Norma Elsbeth Worsfold; his parents Walter and Maud Worsfold; sister Lydia Johnson; and his brother Gordon Worsfold. Maurice is survived by his loving partner, Bonnie Rand; children, Janet McKitrick (Ken), David Worsfold (Shannon) and John Ward Shuve (Jane); grandchildren, Caitlin McKitrick (Dan), Kyle McKitrick, Matthew McKitrick, Jake Worsfold and Jenny Worsfold; first wife, Gillian Stowe; and sisters, Brenda Able and Dorothy Worsfold. Bought in 1977 on his honeymoon with Norma, Maurice’s property in Huron Country Ontario, was one of his favorite places to relax and enjoy the outdoors. Over the years, Maurice and Norma built the small cottage into a lovely summer home at which many happy family gatherings were held and enjoyed. In keeping with his wishes, Maurice’s ashes will be scattered at the property (lovely known as The Farm) in the spring. The family would like to thank Vitas Healthcare for the excellent Hospice care they provided for Maurice during his last 3 months.

Maurice Henry Worsfold died peacefully at his home in Grapevine, Texas on October 11, 2021 after a short battle with lung cancer. He was born in Worthing, West Sussex, England on October 22, 1935 to Walter and Maud Worsfold. Maurice served... View Obituary & Service Information

The family of Maurice Henry Worsfold created this Life Tributes page to make it easy to share your memories.

Maurice Henry Worsfold died peacefully at his home in Grapevine,...

Send flowers to the Worsfold family.