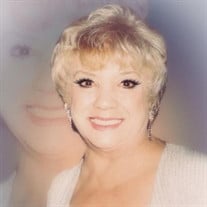 Mary Margaret “Peggy” Nickell, 82, passed away on Monday, April 19, 2021. Peggy was born on February 23, 1939 in Prescott, Arizona to Monty and Lottie Weisel. She graduated from St. Mary’s High School in Pheonix, Arizona and married David Albert Consolver in 1957. Peggy and David relocated to Texas in 1967. While their marriage would not last forever as they’d hoped, Peggy and David remained close until David’s passing on May 22, 1984. As a team, they raised their five children, David, Mike, Charlotte, Matt and Greg. Peggy remarried Clifford “Nick” Nickell in 1986. (died in 1997) father to Cheryl, Rusty, Cindy, and Mickey and together they created a large, blended family that they cherished. Peggy will be remembered for many things, including her quick wit, her love for entertaining, and for regularly checking in with family and friends. She reveled in family history and stories, as well as tales from her travels. A friendly and caring woman, Peggy never met a stranger. Peggy was preceded in death by her parents, four brothers and sister. She is survived by her children, David and wife, Janet of Murphy, Texas, Mike and wife, Cindy of Bedford, Texas, Charlotte and husband Marshall of Rowlett, Texas; Matt and wife, Patti of Highland Village, Texas; Greg and fiancé, Susie of Arlington, Texas along with her step-children, Cheryl Nickell of Irving, Texas; Rusty Nickell of Plano, Texas; Mickey Brown and husband Michael of Richardson, Texas. Peggy’s life was full of love for her 7 grandchildren, Ben and wife Talitha of Dallas; Andy Canipe and wife Katelyn of Royce City, Texas, Griffin Cline and Marisol of Austin, Texas, Jake Consolver and wife Emily of The Colony, Texas, and John Consolver of Highland Village, Texas and Nick Consolver and Michael Consolver of Bedford, Texas and 2 great grandchildren, Aydan and Aaron of Royce City, Texas and with a new blessing due this coming winter. Our mother, aunt, grandma, great-grandma and friend was an unbelievable woman who practiced love, kindness and generosity while sharing her passion for adventure with those around her. She had many lifelong friends, and she continuously made new friends along the way. She was deeply loved and will be dearly missed. On Wednesday, April 28, 2021 at 1:00 p.m. a Live Stream of Mary Margaret “Peggy” Nickell’s Celebration of Life will be viewable here https://video.ibm.com/channel/23847896

The family of Mary Margaret "Peggy" Nickell created this Life Tributes page to make it easy to share your memories.

Send flowers to the Nickell family.