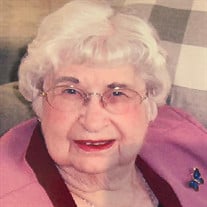 Mary “Frankie” Modrall Johnson was born on June 21, 1925, to Luther E. and Lucy Ellen Best Modrall in O’Donnell, Texas. She passed into eternity at the age of 96 on February 1, 2022 in Houston, Texas. Her parents moved to Roosevelt County, New Mexico, when Frankie was a little girl. She attended school in Portales, New Mexico. She worked for the Bell Telephone Company for 32 years before retiring. She married Lewis Norman Johnson on March 3, 1946. They were married 68 years when he passed away in 2014. Frankie accepted Christ as her Savior as a young girl and served Him through her lifetime. Lewis was called into ministry in 1948, and Frankie served alongside him in New Mexico, Washington, and Texas for the years of their marriage pastoring churches, supply preaching, and many other services to others. Services for Frankie will be held at First Baptist Church, Keller, Texas, on February 14, 2022 at 11:00 AM. Burial will be at the Dallas Ft. Worth National Cemetery on February 14 at 9:00 AM. Visitation will be at the Lucas Funeral Home in Keller on Sunday, February 13 from 4:00 PM to 6:00 PM. Frankie was preceded in death by her parents, a young sister, Myrtle, brother, Wade Modrall, sister, Vernell Gayden, sister, Velma Bollinger, husband, Lewis Johnson, and son-in-law, Eddy Wilks. She is survived by her sister, Claudia Hollen of Santa Fe, NM, her daughter, Frances Wilks of Houston, TX, her grandson and family, Timothy and Lauri Wilks and their daughters Clara and Nell of Coronado, CA, her granddaughter and family, Dean-na and Mark Warner and their daughter, Kayley of Houston, TX, her grandson and family, Matthew and Kindall Wilks and their daughters, Abby and Edda of Willow Park, TX. She is also survived by many nieces and nephews and a host of cousins. Memorials can be sent to First Baptist Church Keller Mission fund or New Mexico Baptist Children’s Home and Family Ministries at PO Box 629, Portales, NM 88130.

The family of Mary Frankie Johnson created this Life Tributes page to make it easy to share your memories.