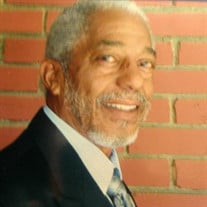 The Homegoing Celebration of Marvin Webster McGrue Marvin Webster McGrue was born June 6, 1944 in Madisonville, Texas to Tommie and Christian McGrue both of whom have been called to their heavenly reward. Marvin was educated in the Corpus Christi Public School system, was in the U.S. Army for 5 years after attending Delmar College, where he received his associates degree in Culinary Arts. Marvin worked in several restaurants before relocating to the Dallas Fort Worth area where he continued to practice his culinary skills at Amfac Hotel where he managed Papayas Seafood Buffet and Mr. G.’s for several years, Then started working for American Airlines and became part of TWU Local 513, Where he had a passion for people to be treated fairly, who he fought for. It was during this time that Marvin became seasoned with love when He met Reba P. Earl. The pair wed on May 9, 1986 and to this union, One child was born, Tommy Lynn McGrue, along with one stepson, Darwin Earl. Marvin and Reba shared 34 years of martial bliss before his earthly departure on March 31, 2021. Marvin took an interest in the MidCities Peewee Football Association, where he coached his own sons and many others. He then became Vice President and the President of the league until his health precluded him in continuing this position. Marvin found pleasure in spending time with family and friends. A talented Chef himself, he enjoyed cooking all of the holiday meals, especially Christmas, Strengthening the communication and love between himself and other family members. Marvin was a diehard Cowboys fan. Marvin was truly a kind and passionate man. After a productive and blessed life, Marvin Webster McGrue entered enternal rest On March 31, 2021. Marvin was preceded in death by his father, Tommie McGrue; his mother, Christine McGrue; brothers, Glen McGrue, Mott McGrue, Tommie McGrue, and Sterling McGrue; sister, Lois Smith. Marvin is forever cherished in memory by wife Reba McGrue; son Tommy McGrue Sr. and Tommy McGrue Jr. whom Marvin helped to rear of Bedford, Texas; step son Darwin Earl of Plano, Texas; sister, Jeraldene McGrue Marshall of Dallas, Texas; six grandchildren, a host of nieces and nephews, and other family members.

Send flowers to the McGrue family.