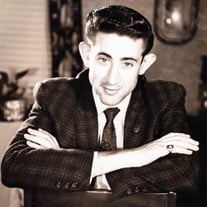 Marlin D. Thompson, 89, passed away Sunday, April 10th due to complications from a car accident. Funeral Services for Marlin will be held Saturday, April 16, 2022, at Lucas Funeral Home-Grapevine at 2:00pm with a visitation beginning at 1:00 pm. Marlin, or more simply known as "M.D.", was born in Solgohachia, Arkansas to Lloyd and Opal Thompson on May 9, 1932. From there the family moved to Miami, Oklahoma where Marlin lived with his parents and younger brother Darrion. Marlin graduated from Miami High School in 1951. A year after graduation Marlin served in the Army from November 1952 to October 1954. After his service Marlin came back to Oklahoma where he ultimately met his wife, Ruth. Marlin and Ruth were married October 22, 1961. A few years later they moved to Coffeyville, Kansas with their two boys Kevin and Kelly. There Marlin worked for National Life and Accidental Life Insurance. Marlin lived in Kansas until Ruth got her dream job working for Delta Airlines in Dallas in 1989. During the next several years they were able to travel the world, enjoying the fruits of their labors. Unfortunately over the past several years, Ruth developed an illness that forced them to live apart. Only due to COVID restrictions, did Marlin ever miss a single day visiting his wife. Marlin's passion was crappie fishing. He spent countless hours on the lake with family and friends. It was extremely difficult to get him to leave. He would say, "The next cast will be a keeper". Marlin is survived by his wife Ruth; sons, Kevin and his wife Deana, and Kelly; grandchildren, Scottie and his wife Meghan, and Madison; brother, Darrion; along with countless in-laws, nieces and nephews.

Marlin D. Thompson, 89, passed away Sunday, April 10th due to complications from a car accident. Funeral Services for Marlin will be held Saturday, April 16, 2022, at Lucas Funeral Home-Grapevine at 2:00pm with a visitation beginning at 1:00... View Obituary & Service Information

The family of Marlin D. Thompson created this Life Tributes page to make it easy to share your memories.

Send flowers to the Thompson family.