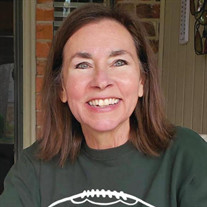 Marla Gwen (Moore) Martin, 62 of Hurst, Texas, passed away on August 26, 2021. Gwen was born March 9, 1959 in Norfolk, Virginia. She spent her childhood in Shelby, North Carolina, just close enough to the Carolina beaches to grow an unending love for sand and waves. In high school, Gwen moved with her family to Wichita Falls, Texas and she graduated from Wichita Falls High School in 1977. Upon graduation, Gwen attended Midwestern State University and pledged Gamma Phi Beta, where she met Charlie Martin during her freshman year. It was love at first sight, and the two were engaged within months. Gwen graduated from Midwestern with a Bachelor’s degree in Psychology in 1981 and she and Charlie were married the same year. A nurturer and forever-learner, Gwen began her teaching career at Barwise Middle School before teaching at Rider High School, where she was awarded Teacher of the Year. In 1990, Gwen and Charlie’s first son, JB, was born, followed by Justin in 1994. Each year thousands of migrating monarch butterflies visited the Martin's backyard, a fitting tribute to Gwen's love for gardening and the outdoors. In 2004, the Martins moved to Hurst, Texas where Gwen taught at Smithfield Middle School and then Birdville High School, which were also attended by both of her sons. A favorite teacher, coworker, and friend, she was known for her open classroom door policy, especially for her sons and their friends, who were frequently found hanging out in her room before and after class. Gwen was named Teacher of the Year at Birdville High School and awarded Birdville District Teacher of the Year in 2012. While teaching, Gwen received her Master’s Degree in Education, and after retiring from Birdville High School, taught at Tarrant County College. In August, 2021, Gwen and Charlie celebrated their 40th wedding anniversary. Gwen was thrilled to anticipate and interact with her first grandchild, a daughter to JB and Taylor due in September, and to welcome Danielle Deats into the Martin family with Justin and Danielle’s upcoming marriage in October. The Martin family would like to thank the team at UT Southwestern Moncrief Cancer Institute for their competent and loving care. Gwen will be so missed by her family, friends and countless students that she touched. Gwen is survived by husband Charlie, son JB, daughter-in-law Taylor, granddaughter Mabel, son Justin, daughter-in-law-to-be Danielle Deats, mother Jeanette Mustian, sister Nancy Moore, mother-in-law Patsy Martin, brother-in-law John David Martin, niece Meredith Wright, and nephew Clark Wright. Gwen was predeceased by her father Ronald Baxter Moore, father-in-law, John Edward Martin Jr, and sister-in-law Judy Kay Martin. In lieu of flowers, Gwen has asked that donations be made to a cancer research organization, First United Methodist Church of Hurst’s Mission Central, or a local animal shelter. Gwen’s Celebration of Life will be held at First United Methodist Church of Hurst on Monday, August 30, 2021 at 2:00pm. The family requests that attendees wear masks. Gwen will be laid to rest at Bluebonnet Hills Memorial Park.

The family of Marla Gwen Martin created this Life Tributes page to make it easy to share your memories.

Send flowers to the Martin family.