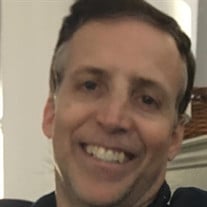 Mark John Wood Mark John Wood, 51, went to be with his Lord and Savior, Jesus Christ on Monday, April 26, 2021, after a courageous battle with cancer. Mark was born on November 3, 1969, in Detroit, Michigan, to Janet Gullo Wood and James Howard Wood. He graduated from University of Texas at Arlington in 1992 where he earned his BS in Computer Science Engineering. Following that, Mark earned his MBA in 1995 and MS in Marketing Research in 1997 also from UTA. During high school and university life, Mark took a position with T & O Service-Marketing in Arlington, TX. In 1997, Mark moved to Targetbase in Irving, TX, and was a highly valued and important contributor, leader, teacher, mentor, colleague, and friend to all of those he worked with for more than 23 Years. Over his tenure, he rose from the position of Analyst to Vice President of the Strategic Business Analysis department. On December 28, 1996, Mark married Chris Abbott. Together, they welcomed two children, Jacqueline and Dominick. Both of them are truly the pride and joy of Mark’s life. On August 2, 2014, Mark married Joley Flowers, his high-school “one that got away.” She was a true blessing to Mark when he needed it most. Their marriage was full of joy, music, and love. She was his unshakable support and partner during his most difficult trials. Mark sang her praises throughout their time together. On August 17, 2020, Mark was blessed with a granddaughter, Maya Grace, who he nicknamed Boo. Mark absolutely treasured her. She gave him the biggest smile you could imagine whenever he saw her (or talked about her)! Mark was a truly devoted husband, uncle, father, and grandfather. He was a rock for his family, friends and those whom he worked with. He was truly invested in the lives of others around him. Mark never ceased giving of himself at home or in the workplace (not to mention on the soccer field!). He was also equally devoted to—and proud of—his parents and his brothers, David and Rick. Nothing brought him more joy than spending time with them, especially at family gatherings during the holidays. Mark’s deep love for Christ was evident to everyone who met him. He was an example to all of courage, faith, and trust in God. This was never more true than during his battle with cancer. He is survived by his beloved wife Joley, his daughter Jacqueline, his son Dominick, his granddaughter Maya, his mother Jan, his father Jim, and siblings David (wife Teresa) and Rick (wife Pattie). He also had many nieces and nephews, including step and adopted, whom he loved dearly. A Funeral Mass will be held on Friday, April 30, 2021 at 11:00 AM at Saint Francis of Assisi Catholic Church: 861 Wildwood Lane, Grapevine, TX 76051. Please wear a mask and limit capacity to 250 persons. A virtual viewing opportunity will be provided. https://www.facebook.com/watch/StFrancisTX/ In lieu of flowers, the family asks that donations be made to the “Arts In Medicine Fund,” in memory of Mark John Wood, to support Music Therapists and Practitioners. https://dallasfoundation.bswhealth.com/ways-to-give/donate Check payable to: Baylor Scott & White Dallas Foundation Please indicate “In Memory of Mark John Wood” on the memo or accompanying note Send to: Sarah Burdi Director BSW Dallas Foundation 3600 Gaston Avenue, Suite 100 Dallas, TX 75246 Gifts of stock can be made by stock by calling the Foundation at 214-820-4721.

Mark John Wood Mark John Wood, 51, went to be with his Lord and Savior, Jesus Christ on Monday, April 26, 2021, after a courageous battle with cancer. Mark was born on November 3, 1969, in Detroit, Michigan, to Janet Gullo Wood and James Howard... View Obituary & Service Information

The family of Mark John Wood created this Life Tributes page to make it easy to share your memories.