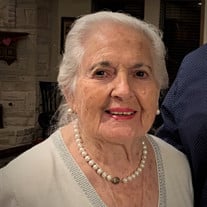 Mariarita Ugolini February 11, 1929 – May 26, 2022 Southlake, Texas – Mariarita Siino Ugolini, 93, beloved mother and grandmother, passed away on Thursday, May 26, 2022. Mariarita was born on February 11,1929 to Rosaria Ingrassia and Giuseppe Siino in Palermo, Italy. She is the 3rd oldest child in a family of seven and was surrounded by many aunts, uncles and cousins during her childhood. She attended University of Palermo where she completed her doctorate in chemistry and departed soon after its completion for Venezuela with her two brothers. There she worked for Shell Oil as chemist until departing in 1954 for the United States to visit her cousin, Ferdinando. Although coming to the United States without speaking any English, she ended up remaining here for the rest of her life. She worked as a chemist in the pharmaceutical industry before raising her family in Seattle, Washington. She lived in Seattle for over 25 years before moving to Rancho Mirage, California where she remained for another 20 years. She came to Texas three years ago to be closer to her daughter and grandchildren. Mariarita loved to travel and did so extensively throughout her lifetime going to Europe, South America, Asia and the Middle East. Of course, going to Italy and seeing her family was her favorite destination. In addition, Mariarita had very strong Catholic faith which she instilled in her children. She believed that faith was not something just practiced on Sunday but rather on a daily basis. Mariarita is survived by her two daughters, Ughetta Miller (Rob) and Annalisa Ugolini (Gilbert) and her greatest joys, her grandchildren, Isabella and Johnathan There will be a Rosary at 10:00 a.m on Thursday, June 2 followed by a Funeral Mass at 10:30 a.m at St. Elizabeth Ann Seton Church in Keller, Texas. Burial service will be following the mass at Bluebonnet Hills Memorial Park in Colleyville, Texas In lieu of flowers, the family is asking for donations to St. Elizabeth Ann Seton in Keller

The family of Mariarita S. Ugolini created this Life Tributes page to make it easy to share your memories.

Send flowers to the Ugolini family.