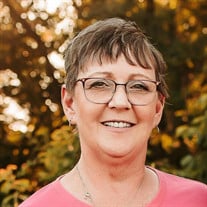 Margaret Ann Bridgewater, a “famous cake designer” in her own rite, unexpectedly transitioned on April 25, 2021 at the tender age of 59. Margaret is survived by her mother, Mary McLemore of Pontiac, Michigan; her husband Amos Joseph Bridgewater Jr. of Saginaw, Texas; her only daughter Brittney (Jeffery) Smith of Hanover, Maryland; two bonus daughters, Tara (Brian) Listenbee of Grand Prairie, Texas; Tanya Bridgewater of Auburn Hills, Michigan; one bonus son, Amos Joseph Bridgewater III of Denver, Colorado; sister Donna Hendrix of Defuniak Springs, Florida; sister Brenda (John) Palmer of Sunrise, Florida; brother Kelvin Paul (Deanna) McLemore of Snover, Michigan; brother Robert Wayne (Doris) McLemore of Pontiac, Michigan; sister Paula Wood of South Poncedeleon, Florida; and sister Janet Wood of Destin, Florida. She is also survived by her nine grandchildren Raegan and Chloe Smith of Hanover, Maryland; Patrick Bridgewater of Grand Prairie, Texas; Mi’eisha Bridgewater of Grand Prairie, Texas; Arnold Listenbee II of Grand Prairie, Texas; Alexandria Listenbee of Grand Prairie, Texas; Alexander Listenbee of Grand Prairie, Texas; Joseph (Terika) Smith of Irving Texas; Sha’Courtney Thomas of Grand Prairie, Texas; three great grandchildren: Jackson and Journie Smith of Grand Prairie, Texas; and Gabrielle Modica Lathon of Grand Prairie, Texas. Margaret was born at Pontiac General Hospital in Pontiac, Michigan on March 21, 1962 to Mary and Clifton McLemore. Her personal walk in faith with God began at an early age as a member of Columbia Ave. Baptist Church. She graduated from Pontiac Central High School in 1981. She worked as a famous and much loved cake designer at Sam’s Club of Grapevine, Texas. Margaret could always be found laughing and joking wherever she went. For her to be “quiet” was a rare occurrence. She could make you feel like she knew you for years within the first 10 minutes of meeting her. As kind of a person that she was, she would never hesitate to tell you how she felt or what was on her heart. She enjoyed reading Danielle Steele novels, keeping up with friends and family on Facebook, playing candy crush on her iPad, and watching her beloved soap operas! She devoted 100% of herself to whatever she did in life whether it was crafting, scrapbooking, party planning, or just spending quality time with family and friends. This amazing woman was a breast cancer survivor and a mentor to others battling cancer themselves. Every third Thursday, she would meet with other cancer warriors for “Wine Night at the Great Table” where they would uplift one another, and enjoy a glass of wine over indulging conversation. She married the love of her life, Amos J. Bridgewater Jr. on October 20, 2000. Then, on November 2, 1990, she welcomed her one and only daughter, Brittney, who was the most important part of her life next to her husband, Amos. Margaret’s love language was giving. She could always be found giving and performing acts of kindness for others. She will be incredibly missed by every life that she has touched.

Margaret Ann Bridgewater, a &#8220;famous cake designer&#8221; in her own rite, unexpectedly transitioned on April 25, 2021 at the tender age of 59. Margaret is survived by her mother, Mary McLemore of Pontiac, Michigan; her husband Amos Joseph... View Obituary & Service Information

The family of Margaret Bridgewater created this Life Tributes page to make it easy to share your memories.

Margaret Ann Bridgewater, a “famous cake designer” in her own...

Send flowers to the Bridgewater family.