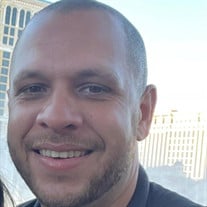 Marcus David McCarty, 35, of Dallas passed away Monday, November 1st, 2021. He is preceded in death by his maternal grandparents Dr. Hazel and Peter McDermott, and paternal grandparents Ross and Roberta McCarty. Marcus was born February 13, 1986 in Fort Worth, TX. Marcus was a naturally talented athlete. Growing up he dedicated his time to becoming one of the best soccer players of his time. He had a dream of becoming a professional soccer player and he made sure he did everything he could to make that dream his reality. Marcus earned a place in the Fossil Ridge High School record books for most goals in a season. After high school, in August 2004, he went on to play soccer for the University of Memphis. Two years later, Marcus transferred to Northern Illinois University where he continued to play the game he loved. He won a variety of awards for his outstanding athletic performance on the field including Newcomer of the year in 2006 as well as player of the Year in 2007. Towards the end of his time at NIU, he finally lived out his dream of being drafted to a professional soccer team with the Minnesota Heat. Due to an injury, that dream became short lived and his soccer dreams were put on hold. He decided to finish out his college career closer to home at Stephen F. Austin University where he graduated with his Bachelor of Arts degree in 2011. Years later he settled in Dallas, TX where he went on to start several business ventures of his own. He enjoyed being outdoors hiking, fishing, and cheering on his favorite sports teams, but most of all, he just enjoyed spending time with his closest friends and family. Marcus filled every room with his bigger than life personality. He set the bar high for himself not only on the soccer field growing up but throughout his everyday life. Marcus was a son, brother, uncle, boyfriend, teammate, and businessman and will forever be loved and missed deeply by all whose lives he touched. He is survived by his parents Ronnie and Patricia McCarty; Sisters, Tatiana Azcarate and Kendra Hughes; future fiancé Natalie Hottinger; David Cowling, Sydney Nguyen; Uncles and Aunts Victor McDermott and wife Cindy, Jackie Williams and wife Chanel, Sandra Allen and husband Ed, Robbie Furtch, as well as numerous nieces, nephews and cousins. Memorial services will be held on November 20, 2021 at 11 AM at St. Vincent’s Cathedral, 1300 Forest Ridge Dr. Bedford, TX 76022. In lieu of flowers, the family requests donations to the Northern Illinois University Foundation in honor of Marcus McCarty in support of Men’s Soccer scholarships at NIU. Donations can be sent to the attention of Michael Daigler, NIU Foundation, PO Box 746 DeKalb, IL 60115. Please include Marcus McCarty Scholarship in the memo section of the check or in a note with your donation. www.niufoundation.org

The family of Marcus David McCarty created this Life Tributes page to make it easy to share your memories.