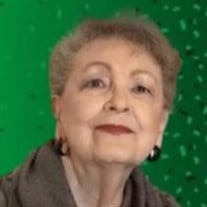 Madeline Juanita (Nita) Green Kerlee was born in Cleburne, Texas to Myrtle Maxine Garner and Chester Kenneth Green who preceded her in death. She was also preceded in death by her husband of 66 years, Billy Edward Kerlee, and her brother Kenneth Green. She graduated from Trimble Technical High School in 1955. After meeting the love of her life on February 14, 1955, she married Bill Kerlee on September 30, 1955. After Bill was drafted into the Army eight months into their marriage, they lived in New Jersey, Maryland, and Hawaii before returning to Texas. Nita along with their daughters followed Bill through ten job transfers over a sixteen-year period with his career at Union Pacific R.R. She and Bill moved two more times before retiring to Texas in 1989. As the beloved matriarch of the family, she managed the household and the girls through all the transitions, along with supporting their interests and activities. Since returning to Texas she enjoyed many activities in her community including the Literary, Dinner and Garden Clubs, as well as spending time with her family and friends. She was also a member of Athens Order of the Eastern Star #177 for twenty-four years. She was active in her church all her adult life and served in many positions. She was a member of the First United Methodist Church of Malakoff. She is survived by her brother, Joseph Green of Alamogordo, NM; her four daughters and sons-in-law, Sherry and Pete Hicks of Fort Worth; Brenda and Lance Sublett of Keller; Darla and Floyd Bartkowiak of Garland; Annette and Marty Whitted of Keller; seven grandchildren and eight great grandchildren. She is also survived by her sister, Nancy Neil of Canton. The services will be held Saturday, June 18, 2022, at the Lucas Funeral Home in Hurst, Texas. Viewing will begin at 1:00 p.m., services will begin at 2:00 p.m. The internment will follow at the Arwine Cemetery in Hurst, Texas.

Madeline Juanita (Nita) Green Kerlee was born in Cleburne, Texas to Myrtle Maxine Garner and Chester Kenneth Green who preceded her in death. She was also preceded in death by her husband of 66 years, Billy Edward Kerlee, and her brother Kenneth... View Obituary & Service Information

The family of Madeline Juanita "Nita" Kerlee created this Life Tributes page to make it easy to share your memories.

Send flowers to the Kerlee family.