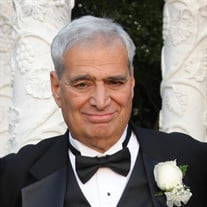 Louis Robert Opipare, Jr. passed away peacefully at his home in Trophy Club, Texas on Monday, February 15, 2021. He had been battling pancreatic cancer for several months. Louis was born in Pittsburgh, PA on February 8, 1948 to Anna and Louis Robert Opipare, Sr. He graduated from North Catholic High School in 1966 and went on to the Electronic Institute and received his FCC license. Louis began working for IBM in 1968 where he worked for 30 years before retiring. He married his wife of 50 years, Pam Opipare, in 1970 and they then had two children, Amanda in 1977, and Louis in 1980. Upon moving to Texas in 1985, Louis became involved in the Trophy Club Fire Department and eventually served as the fire chief for 11 years. Louis was involved in the town of Trophy Club up until his death, serving on numerous different committees over the years. After battling leukemia in 2011, Louis welcomed the first of 3 grandchildren, Madilyn, in 2012, followed by Ethan and Alex in 2016. He was a devoted husband, father, and PapPap, as known by his grandkids, always taking the time to do special things with each of them. In his community, Louis was seen as a leader and giver to all who knew him. Louis enjoyed many things, but was happiest when spending time with his grandkids. Louis Robert Opipare, Jr., is survived by his wife, Pam Opipare, of Trophy Club, TX, daughter Amanda Price and husband Daniel Price, of Trophy Club, TX, and son Louis Robert Opipare III and wife Sarah Wen, of Richardson, TX. He leaves behind his beloved grandkids Madilyn Price, 9, Ethan Price, 4, and Alex Opipare, 4. Louis is also survived by his brother William Opipare and wife Virginia Opipare and brother Anthony Opipare and wife Judith Opipare, all of Pittsburgh, PA. He also leaves behind many cousins, nieces, and nephews, along with numerous friends. Louis was preceded in death by his parents Louis Robert Opipare, Sr., and Anna Opipare. A memorial will be held on Monday May 3rd at 11am at St. Francis of Assisi Catholic Church at 861 Wildwood Ln in Grapevine, TX. In lieu of flowers donations can be made to the American Leukemia Foundation or the American Cancer Society.

Louis Robert Opipare, Jr. passed away peacefully at his home in Trophy Club, Texas on Monday, February 15, 2021. He had been battling pancreatic cancer for several months. Louis was born in Pittsburgh, PA on February 8, 1948 to Anna and... View Obituary & Service Information

The family of Louis Robert Opipare, Jr. created this Life Tributes page to make it easy to share your memories.

Louis Robert Opipare, Jr. passed away peacefully at his home...

Send flowers to the Opipare family.