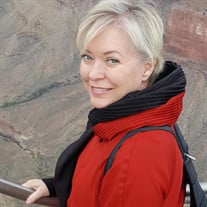 KELLER, TEXAS -Lisa Harper Wood went to be with the Lord April 27, 2021 . Memorial Service: 2:00pm, Saturday, May 1, 2021 at North Richland Hills Baptist Church, 6955 Boulevard 26, North Richland Hills, Texas. Interment: Privately at Bluebonnet Hills Memorial Park, Colleyville, TX. Visitation: Following the Memorial Service at the church. Lisa, better known as “Kiki” to her grandkids, was born August 9, 1956 in Grapevine, Texas to Betty (Laminack) and H.J. Harper, Jr. She graduated from Grapevine High School in 1975 and received her B.S. degree and Master’s degree, both in Library Science from Texas Women’s University. She married Michael Eason in 1978 and their daughter Maegan was born in 1984. She met Mark Wood in 1994. They married in 1996 and just recently celebrated 25 wonderful years together. Lisa was a librarian for 32 years, including 20 years as the Library Director for the City of Keller and another 5 years as the Director in Richland Hills. She was named Library Director of the Year in 1994 by the Texas Municipal League. After retiring she spent several years as a transitional parent of newborns for the Edna Gladney Center. Lisa loved reading and promoting literacy. She was a strong supporter of the Friends of the Keller Library and she looked forward to the monthly gathering of her book group, “As the Pages Turn”, started with a dozen close friends many years ago. She also loved all the time spent with her high school girlfriends. Her family, friends and her faith came first in all she did. She was a member of First United Methodist Church in Keller. Survivors: Husband Mark S. Wood of Keller, daughters Maegan Eason of Dallas, Ashley Dane and husband Randy of Lake Jackson, and Alden Johnson and husband Scott of Ft. Worth, grandchildren Kendall Dane, Cooper Dane, Calli Dane, Stephen Johnson and William Johnson, mother Betty Harper of Grapevine, brothers Jeff Harper and wife Christina of McKinney and Clint Harper of Grapevine and wife Christi, also of Grapevine, and many nephews and nieces, cousins and good friends. Lisa was preceded in death by her father, H.J. Harper, Jr.

The family of Lisa Harper Wood created this Life Tributes page to make it easy to share your memories.

KELLER, TEXAS -Lisa Harper Wood went to be with the Lord April...