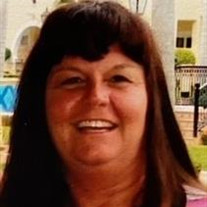 Lisa Williams was born November 13, 1964 in Fort Worth Texas to James and Betty Williams. She went to be with her Lord and Savior, Jesus Christ on February 15, 2022. There comes a day and time that our life here on Earth comes to an end. A question we must ask did we live? Fully live with no regrets? Lisa did!! Lisa packed so much life into her 57 years. Lisa was known for her love of animals, friendships and her family. She knew her time here on Earth would be short but that didn’t stop her from living. Her biggest concern was who she would be leaving behind. Lisa was the true definition of genuine. You never had to worry about her sugar coating anything to spare feelings. She believed if it needed to be said she said it! Lisa was born a fighter and protector. At roughly 3.5 years old God knew she needed a sibling. She was given a sister that she would forever defend and protect…maybe the occasional torment but we won’t get into the specifics. Lisa was a one of a kind sister. A true built in best friend. Later in life they became room mates like when they were younger. Many emotions flowed through out that household. Lots of love, laughter, tears and the occasional tiff. Even on the off days she always had her sisters back. Lisa became a mother to Telisha and Brandon and very young age. With that their day in and day out came with a hand full of challenges. Each and everyday there was a new obstacle that they had to over come together. As a young mother they were forced to grow up together. Even with the daily struggles they lived and made the best of their situation. Being young and having children did come with fun memories anything and everything in between water parks, amusement parks or a simple day jumping in the rain puddles outside. The day Katie was born Lisa’s title was quickly promoted from Mom to Mimi. She was given a second chance to be the grand”mom” that she desperately thrived to be with her own. Lisa didn’t take her title of mimi lightly. She instilled love, laughter, fun and many many memories with her grandchildren. Katie, Gunnar and Tripp were her everything. She would go to the end of the world to make sure they were taken care of. Not only a sister, mom, and Mimi she was an incredible Aunt and Hehe to a number of nieces/nephews and great nieces/nephews. Aunt Lisa didn’t just belong to us, her family, she belong to everyone. It didn’t matter if it was a nieces friend and her kids, they had an Aunt Lisa and Hehe. Hehe took her aunt duties to another level. She was an Uber and Door Dash before Uber and Door Dash was a thing. No matter the time or day she would be there in your time of need. Later in life Lisa became a bartender! She had a passion for being behind the bar, socializing and interacting with her customers. With her job she quickly gained a variety of friendships. Lisa never met a stranger. It did not matter where or when, but within a conversation she would know your life story and would come out with a new friend. The lives she impacted while she was here was unimaginable. Whether you knew Lisa as Mom, Sister, Mimi, or Hehe you will miss her strong will, her amazing smile and her loud contagious laugh. She never wanted to be told that she couldn’t do something. She would find a way, her way, to prove a point. Lisa was proceeded in death by her parents James and Betty Williams, her son Brandon Bartlett and Casey her best friend. Lisa is survived by her daughter, Telisha Beasley and husband Ed of Artesia, New Mexico. Sister Lori Jackson and husband Mark of Granbury, Texas. Grandchildren Mikayla Safka, Gunnar and Tripp Bartlett all of Granbury, Texas. Along with with a host of nieces, nephews, cousins, and friends. In lieu of flowers, please click on the link below to make a donation in Lisa's name to the IPF Foundation. Lisa was passionate about finding a cure for this disease that has affected our family for many years. https://www.pulmonaryfibrosis.org/

Lisa Williams was born November 13, 1964 in Fort Worth Texas to James and Betty Williams. She went to be with her Lord and Savior, Jesus Christ on February 15, 2022. There comes a day and time that our life here on Earth comes to an end. A question... View Obituary & Service Information

The family of Lisa Bartlett created this Life Tributes page to make it easy to share your memories.

Send flowers to the Bartlett family.