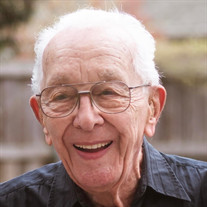 Lester Wilton Wevers, 94, formerly of Panama, NY went to his eternal home in Glory on March 25, 2022, in North Richland Hills, TX after relocating there in 2020. A Panama resident since 1952, he was born April 18, 1927, in North Clymer, NY, the son of Wilton and Ida Legters Wevers. He grew up in Bear Lake, PA and attended Panama Central School, graduating as valedictorian of his class. Upon graduation in June 1945, he was drafted into the US Army and he served from August 1945 until February 1947-spending one year in occupation duty in Vienna, Austria as a clerk typist in Headquarters Company of General Mark Clarks US Forces in Austria. During that time, he attained the rank of sergeant. Following military duty, he attended Grove City College and graduated in 1950. Later that year on September 23, 1950, he married his high school sweetheart, Wyona Marian Dole. After employment with GLF in Ithaca and Leroy, NY for years, he returned to Panama. During his work career he was employed for 28 years at Blackstone Corporation in Jamestown, followed by a 3-year employment in the Jamestown School system, followed by his retirement in 1983. He enjoyed his years as partner in the ownership of Panama Rocks Park from 1969- 1979. During his working career he also served as treasurer of the Panama United Methodist Church; at the same time serving for 20 years as treasurer of the Panama Central School. He served as an active member of the Panama Volunteer Fire Company and acted as its secretary for many years. He served as treasurer of the Harmony Senior Citizens from 2001 thru September 2013. He enjoyed hunting; fishing and outdoor sports and following his retirement he became an active golfer. During this retirement period he and his wife conducted an antique and collectible business, buying locally & transporting to the Texas auction market. He and his family enjoyed travel throughout the US where they were able to visit 49 of the states and missed only Alaska. He loved Panama Central School athletics and attended and supported many of the school athletic teams. His decision to follow Christ as a teenager led to his desire to be a faithful and active member of the Panama United Methodist Church from 1952-present. In addition to his service as treasurer, he taught Sunday School and served on numerous other church committees. His mission trip to Haiti was one of the highlights of his retirement. He is survived by his wife, Wyona Dole Wevers and four daughters. Barbara A. Dunlap (Gary) of Southlake, TX; Marcia J. Mohoric (Edward) of West Chester, PA; Catherine L. Caldwell (Rev. Sam) of Commerce, TX and Dorothy R. Morris of N. Richland Hills, TX. Also 12 grandchildren-Jennifer Dunn (Shelton); Melissa Vittas (John); Adrienne Dunlap; Peter J Mohoric (Brandi); Rachael Mohoric (Shelby); Jesse Mohoric (Ashley); Drew Mohoric-world traveler; Aubrey Presley (Nathan); Cameron Wright (Kyle); Edith Cody (Brennen); Margie Morris and Wendi Guillaume (Ben). He was fondly known as “Rascal;” to his 19 Great-grandchildren-Tyler & Delaney Dunn; Madeline, Norah & Jack Vittas; Brandon & Bryce Jones; Brooks Mohoric; Quinn & Hayden Abbott; Kienan & Tiegan Mohoric; Nathaniel & Caroline Presley; Hudson Wright; Joy, Grace, Phin & Hannah Cody. He is also survived by his sister’s children - Rod Beckerink (Marian); Phil Beckerink and Jana Anderson (Wayne) and several nieces and nephews. He was preceded in death by his father Wilton Wevers in 1961; his mother Ida Legters Wevers in 1975; his sister Carolyn Beckerink & her husband Robert in 2020 and and infant granddaughter, Emily Dunlap. A combined Celebration of Life service will be held in the Panama United Methodist Church at a future date. Memorials may be made to the Panama United Methodist Church, 22 E Main Street, Panama, NY 14767. Funeral arrangements made by Lucas Funeral Home of Keller, TX. The family would like to give a warm & heartfelt thanks to Encompass Hospice for their caring; giving; loving care of our husband/father/grandpa and Rascal in the last 4 months of his life.

The family of Lester Wilton Wevers created this Life Tributes page to make it easy to share your memories.

Lester Wilton Wevers, 94, formerly of Panama, NY went to his...

Send flowers to the Wevers family.