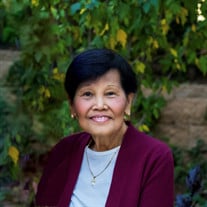 Leonora ‘Nora’ Kirkman gained her angel wings on February 5, 2022. Following a short battle with pancreatic cancer. She passed peacefully with her husband, Merritte, daughter Mary, and son-in-law, Eric, by her side. Nora began her earthly life on August 6, 1939, in Bacolod City in the Philippines. Her parents, Cesar and Consolacion Arca, preceded her in death. One of Nora’s fondest memories of her youth is when she was crowned Queen of the Fiesta. This was a huge honor for the proud teenager and the glow of this hometown event lasted into her adult years. Nora’s life took a turn when she met Merritte who was stationed at Clark Air Base in the Philippines. Merritte entered Nora’s life and would be a constant loving companion until her final breath. Nora and Merritte were married in the Philippines on May 3, 1969 – for the first time. After living in Okinawa for a time, Merritte returned to the U.S, bringing Nora with him. After being married for eight or nine years, the two discovered a glitch in their marriage, which became something they would laugh about for years. Nora applied for her U.S. citizenship and discovered that she was still legally married to a man in the Philippines. She had to divorce her first husband so that she and Merritte could get married – again. They were married for the second time on their 10th anniversary, May 3, 1979 – with their daughter, young Mary Jane Kirkman, able to attend her parent’s second wedding. In South Bend, Nora worked at a variety of jobs until she finally was able to open her own business, Nails by Nora. Through this business, she gained many new friends, some that she’d have for the rest of her life. When Nora and Merritte moved to Texas in 1999, Nora worked at various positions until she found where she’d stay for the rest of her working career. For the next twenty years, Nora worked at Carroll Independent School District, most of that time at the Dawson Middle School cafeteria. She made many friendships with both students and staff. Nora loved feeding the kids lunch and often got it trouble for giving them too large of portions. Many of her coworkers were with her in her final days, sharing their friendship, their love, their prayers, and their blessings with Nora. Nora lived a full life, surrounded by family and friends. She spent countless hours watching her grandchildren, Nathan and Emily play various sports. If she wasn’t working or spending time with grandchildren, Nora loved to visit casinos and sing karaoke. For several years she bowled in a league with her husband and friends. And she adored cooking and feeding people. For Nora, food and nurturing went hand in hand. Knowing her days were short, in December 2021, Nora was accompanied by Merritte and Mary and able to make a trip back to Indiana to see many of her friends and family members. This trip was very meaningful to her. Casinos were a passion of Nora’s. One of her favorites, one that will sorely miss her is Winstar Casino in Oklahoma. She loved her slot machines and crab buffet. She visited many casinos during her travels. The middle child of five siblings, Nora is survived by her younger brother and sister, Jose Arca and Lolita Garcia. Her older brother and sister, Romeo Arca and Aida Rodriguez, preceded her in death. Nora is survived by her husband Merritte Kirkman of Grapevine, TX, daughter Mary Jane(Eric) Cooper of Fort Worth, TX, son Roesholm (Arlene) Serenio of Newcastle, England, grandchildren, Nathan Cooper, Emily Cooper, Ryan Serenio, Stephanie Serenio, great grandchildren, Skandi and Skye Serenio, and grandson of her heart Nolan Mitchell, along with numerous nieces and nephews around the world. The family wishes to thank everyone for all the love and support they have shown Nora and her family during these difficult days. The viewing and Rosary will be held Thursday, February 10, from 5 pm – 8 pm at Lucas Funeral Home, 700 West Wall Street, Grapevine TX 76051. Services will be held Friday, February 11, at 3:00 p.m. (30 minutes of viewing prior to service) at First United Methodist Church, Main Sanctuary, 422 South Church Street, Grapevine, TX 76051. Live streaming will be available for both Thursday and Friday services. After Friday’s services, family and friends will gather together in love and friendship at a different location. If you wish to join the family, contact Mary Cooper for details. Nora will be laid to rest on Monday, February 21, at 11:15am at Dallas-Fort Worth National Cemetery, 2000 Mountain Creek Parkway, Dallas, TX 75211. Donations can be made to the Pancreatic Cancer Action Network (pancan.org) or First United Methodist Church Grapevine endowment fund (firstmethodistgrapevine.org)

Leonora &#8216;Nora&#8217; Kirkman gained her angel wings on February 5, 2022. Following a short battle with pancreatic cancer. She passed peacefully with her husband, Merritte, daughter Mary, and son-in-law, Eric, by her side. Nora began her... View Obituary & Service Information

Send flowers to the Kirkman family.