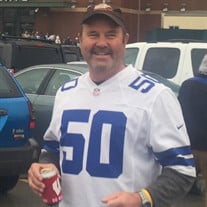 Hurst, TX – Lee Stewart Ericson of Hurst passed away Tuesday, July 13, 2021, after a tough battle with cancer. Funeral: A memorial service shall be held at Lucas Funeral Home in Hurst on July 31 at 2pm. There shall be a celebration of life to follow at Bronco's Sports Bar and Grill. Lee was born in Brooklyn, N.Y., on January 5, 1958. His family moved to Great Kills on Staten Island, N.Y., in 1958, where he attended Public School 8, Barnes Middle School, and McKee High School. While in high school in 1974, at the age of 16, he started working for a small bicycle store in the town of New Dorp, a few bus stops from his house. The proprietor of the store was, at best, somewhat unreliable, and Lee ended up as the acting manager until the store closed in 1979. He decided to move to Bedford, Texas in 1979 to live with his mom, who had moved to Texas several years prior. While working at Mecham Airfield building aircraft hangers in the brutal Texas summer heat he made a fateful decision. He and his business partner, Mom, went into the bike business. When the business was sold 42 years later, Bicycles, Inc. was one of the most successful small businesses in Tarrant County and was highly rated nationwide as one of the best stores selling both Trek and Specialized bicycles. Lee was a man of many talents. First and foremost, he was a master of his craft, knowing all there was to be known about his product and the intricacies of running a business, calling on his hard-earned experience managing a store at the ripe old age of 16. Secondly, he was an excellent judge of character and was very selective in evaluating prospective employees. Thirdly, he was a very tough but fair employer, realizing that a business was only as good as the people working there as they are the ones that build the business. As a testament to his abilities as a manager and an employer, many of his employees had been there for well over two decades. The people at Bicycles, Inc were, quite truly, family. He was also a family guy with seven children. Though he often worked long hours to build a business, he always managed to find time for the children and ensured they never lacked resources for dance or soccer or cheerleading or hockey. He was always supportive, even dancing in front of a huge football crowd with his daughter, which no grown man should have to do. He was the consummate grandfather, doting and bragging over his ever-increasing brood of small people. He loved nothing better than hosting a weekend at the lake house for the grandchildren. Lee was also a community-oriented guy. He could always be depended upon to contribute time and resources to support local community charitable events. If there was a bicycle for a door prize, odds where it had a Bicycles Inc. sticker on it. Bicycles Inc. was a charter sponsor of the annual MS150 bike ride in Tarrant County, raising thousands of dollars in support of research into a cure for Multiple Sclerosis. Lee was a credit to his family, his community, and his business. He will be sorely missed. Lee was preceded in death by his mother and father, Doris and Nils Valentine Ericson Sr., and his sister, Linda Ericson Blake. Survivors: Wife of 7 years, Tammy; Children and their spouses, Allison and David Kohtz, Stewart and Lucy Ericson, Alex Ericson, Morgan and Collin Callaway, Taylor Baptista, Colton and Casandra Cathey, Taylor Cathey; brothers, Nils Valentine Ericson Jr and wife Ann, Jay Robert Ericson, Roy Walter Ericson and wife Mary, Scott McCaskey, Robert Blake, numerous special small people, and a host of close friends whom he considered family. Memorials: In lieu of flowers, a donation may be made to the American Brain Tumor Association or the National Multiple Sclerosis Society.

Hurst, TX &#8211; Lee Stewart Ericson of Hurst passed away Tuesday, July 13, 2021, after a tough battle with cancer. Funeral: A memorial service shall be held at Lucas Funeral Home in Hurst on July 31 at 2pm. There shall be a celebration... View Obituary & Service Information

The family of Lee Stewart Ericson created this Life Tributes page to make it easy to share your memories.