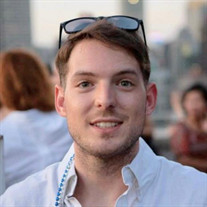 Larry Vincent McCormick II, known to everyone as Vincent, passed unexpectedly on April 20, 2022, in Fort Worth, Texas. He was 34 years-old. Vincent was born April 8, 1988, in Shreveport, Louisiana to Larry and Donna McCormick. In 1994, his family moved to Keller, Texas where he lived a happy and peaceful childhood. From an early age, Vincent exhibited his creativity through several art mediums and spent hours upon hours building LEGO sets. As a talented young artist, he “couldn’t live without art paper.” Growing up, Vincent mastered many different hobbies and activities. He participated in sports - ranging from skateboarding to pole vaulting. He excelled as a goalie in both in-line and ice hockey leagues for several seasons. He played the euphonium beautifully for the Keller High School marching and wind ensemble bands. He even taught himself to ride a unicycle. After graduating from Keller High School in 2006, Vincent earned an associate degree from Tarrant County College. He then pursued a bachelor’s degree in petroleum engineering from Texas Tech University in Lubbock, Texas. While attending Texas Tech, he received many awards and scholarships for his academic merit, including membership in the Phi Theta Kappa honor society, and served as a university ambassador. Vincent spent time working in the food industry for Bassham Foods and Classic Foods in Fort Worth, Texas before changing his occupation to also include construction. Over the past three years, Vincent advanced through the company to Lead Crew Supervisor for L&L Building Solutions. He enjoyed the challenge and fresh air that his job provided. Traveling extensively for the job, he was fortunate to see all four corners of the country and most places in between. In his free time, Vincent focused on his lifelong passion for painting and recently began working with oils. Vincent is remembered by his parents, Larry and Donna McCormick; brother, Marshall; sister, Nicole; grandmothers, Evelyn ‘Pat’ Hughes and Norma McCormick; extended family, and friends. Those who knew him in life will remember him for his charm, his generosity, his sense of fashion, his smile, his unwavering support, his art, his ability to talk to anyone or anything in some cases, his love for good food and good times, his hairstyles, and his sense of humor. Vincent loved all dogs, especially the family dachshunds, and dreamed of opening a “Weenie Ranch” one day. A memorial service will be held 2:00 pm Saturday, April 30, 2022, at Lucas Funeral Home, 1601 S Main St, Keller, Texas, 76248. Vincent - Forever in our hearts.

Larry Vincent McCormick II, known to everyone as Vincent, passed unexpectedly on April 20, 2022, in Fort Worth, Texas. He was 34 years-old. Vincent was born April 8, 1988, in Shreveport, Louisiana to Larry and Donna McCormick. In 1994, his... View Obituary & Service Information

The family of Larry Vincent McCormick II created this Life Tributes page to make it easy to share your memories.

Larry Vincent McCormick II, known to everyone as Vincent, passed...

Send flowers to the McCormick family.