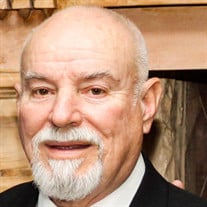 Larry Gene Mandrell, devoted husband, loving father, amazing Granddad and a friend to everyone he ever met, passed away on October 16, 2021 after a sudden and unexpected illness. He was preceded in death by his wife of 52 years, Carol McGill Mandrell, and his parents Dorothy Simmons and Eugene Mandrell. Granddad, as he was affectionately known to most of his family, was born in Benton, Illinois and eventually made his home in north Texas. He was a proud veteran of both the United States Army and United States Navy, and a retiree of Bell Helicopter where he worked for over forty years. He was a devout Catholic and was a parishioner at St. John the Apostle Catholic Church in Richland Hills, Texas since the 1970s. A lover of nature, avid gunsmith, and exceptional storyteller, Larry loved his family above all else, and especially his grandkids and great grandkids. Nothing brought a smile to Granddad’s eye like spending time with family – the more, the better. Although his adventures took him many places throughout his lifetime, he was happiest in the country with simple surroundings and abundant wildlife. His final years were spent surrounded by thousands of acres of ranchland in Mineral Wells, a place where he found peace whether tinkering with guns, sitting on the porch watching the sun set, or taking a stroll down the gravel road to visit with neighbors who quickly became friends. With a bright smile, a quick wit and the ability to make anyone laugh despite their circumstances, Granddad was one of those rare people who everybody loved - and he never hesitated to let the people in his life know that he loved them back. Granddad, we will all miss you dearly and we will love you forever. Larry is survived by his daughters Michelle Mandrell Johnson (husband Brandt) and Nicole Mandrell; grandchildren Joshua Mandrell, Jacob Mandrell, Matthieu Reeves, Bailey Mandrell, Peyton Johnson and Braden Johnson, bonus grandchildren Madison Johnson, MacKenzie Johnson and Ty Johnson and great-grandchildren Chloe Reeves (known to Granddad as “the prettiest girl in Texas”) and Liam Reeves, as well as countless other family and friends. Mass of Christian Burial will be celebrated on Tuesday, November 2, 2021 at 11:00 a.m. at St. John the Apostle Catholic Church in Richland Hills, Texas. Burial with military honors will take place on November 2, 2021 at 3:00 p.m. at the Dallas/Fort Worth National Cemetery, where he will be laid to rest beside the love of his life, Carol. Due to floral restrictions at the National Cemetery, in lieu of flowers, donations may be made to St. Jude Children’s Hospital.

Larry Gene Mandrell, devoted husband, loving father, amazing Granddad and a friend to everyone he ever met, passed away on October 16, 2021 after a sudden and unexpected illness. He was preceded in death by his wife of 52 years, Carol McGill... View Obituary & Service Information

The family of Larry Gene Mandrell created this Life Tributes page to make it easy to share your memories.

Send flowers to the Mandrell family.