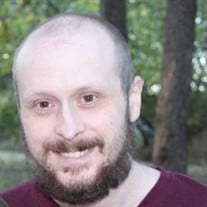 Kevin Alexander Wain, known by many as (iDizzy81), was born on December 30, 1986, in Gosnell, Arkansas. In 2009, he followed many friends from Missouri to live in Fort Worth, Texas, where he resided for 12 years. Early morning on Tuesday,... View Obituary & Service Information

The family of Kevin Alexander Wain created this Life Tributes page to make it easy to share your memories.

Kevin Alexander Wain, known by many as (iDizzy81), was born on...

Send flowers to the Wain family.