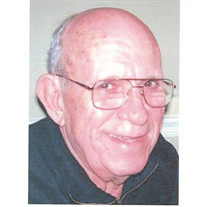 Kenneth Mayfield, 87, peacefully passed away at his home in Fort Worth, Texas on Wednesday, October 13, 2021. Born on March 21, 1934, in Ballinger, Texas; Kenneth was the eldest of two boys born to the late Oliver Hicks and Willie Pullin Mayfield. He proposed to his wife, Bonita Lou Smith on Valentine’s Day in 1956 and they were married August 24, 1956, in San Benito, Texas. Kenneth was a U.S. Army Veteran and served for two years overseas in Germany. Later, after leaving the Army, he worked as a foreman for Central Power & Light in Corpus Christi until his retirement. Kenneth loved God and was a member of the Church of Christ, serving as an elder at Windsor Park Church of Christ in Corpus Christi. He was an avid coin collector and history was one of his great interests in life. Quick witted and funny, he had a great sense of humor and loved to spend time with family and friends. He was a great example to others around him and he loved his family dearly. He will be missed by many people. Kenneth was preceded in death by his wife of 63 years, Bonita Mayfield; his parents, Oliver and Willie Mayfield; and brother, Robert Mayfield. He is survived by his two daughters, Teresa Farrow; Pamela Osborn and husband, David; five grandchildren, Joseph (JD) Osborn; Liza Amicone and husband, Jared; Jared Farrow and wife, Ahalee; Abbey Morgan and husband, Parker; Garrett Farrow and wife, Samantha; and two great-grandchildren, Charlotte Morgan and Jackson Farrow; along with a host of loving family and friends. Visitation will be held from 2:00 to 4:00 pm, Sunday, October 17, at Lucas Funeral Home in Keller, Texas. Funeral service will be held at 2:00 pm, Monday, October 18, at the Keller Church of Christ in Keller, Texas. His body will be interred at 2:30 pm, October 27, at the Dallas-Fort Worth National Cemetery in Dallas, Texas.

Kenneth Mayfield, 87, peacefully passed away at his home in Fort Worth, Texas on Wednesday, October 13, 2021. Born on March 21, 1934, in Ballinger, Texas; Kenneth was the eldest of two boys born to the late Oliver Hicks and Willie Pullin Mayfield.... View Obituary & Service Information

The family of Kenneth Mayfield created this Life Tributes page to make it easy to share your memories.

Kenneth Mayfield, 87, peacefully passed away at his home in Fort...

Send flowers to the Mayfield family.