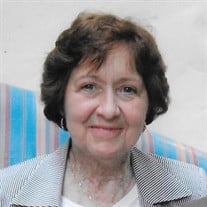 Kathleen Ann Talsma (nee Grater) passed away surrounded by her loving family at her home on February 12, 2021. Kathleen was born on February 29, 1944 in Cincinnati, Ohio to Richard and Vera Grater (nee Kollman). The middle daughter of three beloved children, Kathleen grew up in Mount Healthy, Ohio, attending Mother of Mercy High School and studying political science and nutrition at Ohio State University. On February 26, 1966 Kathleen married Warren Glenn Talsma in Columbus, Ohio where they made their first home and welcomed their first daughter Elizabeth in 1968. After relocating to Cleveland, Ohio the family grew, adding son John, and daughters Caroline and Abigail. Kathleen was a passionate advocate of Early Childhood Education and served as Director of Newbury Preschool of Newbury, Ohio. In 1986, the family moved to Charlotte, North Carolina where Kathleen continued her efforts, volunteering at her children’s schools. After relocating to Keller, Texas in 2003, she served for seven years as the treasurer of the Flanagan Hill HOA. She was a passionate fan of Ranger baseball, a talented seamstress, and an avid learner and reader. Kathleen was grandmother to four thoroughly adored grandchildren. Affectionately known as “Grandma Cake”, she strove to spoil them completely, never missing an opportunity to remind each that they were her favorite people. Kathleen is preceded in death by her father, Richard A. Grater and her mother, Vera Grater. She is survived by her husband of 54 years, Warren Talsma, her children Elizabeth Clarke, of Charlotte North Carolina, John W. Talsma II of North Richland Hills, Texas, Caroline K Green and son in law Wes Green, of Round Hill, Virginia, and Abigail V. Talsma of Keller, Texas, her grandsons Andre Clarke Jr, and Nathaniel K. Green, granddaughters Caroline R. Green and Anderson E. Green, sister Marica Biniger and brother in law, Dr. Garry Biniger of Cincinnati, Ohio, and sister Mary Lou Dyjack and brother in law, Richard Dyjack of Ellington, Connecticut. Please join Kathleen’s family in celebrating her life on March 20, 2021 at 2 o’clock in the afternoon at NorthWood Church, 1870 Rufe Snow Dr. in Keller. The service will be held in the Chapel and will be live-streamed at NorthWood Church’s website www.northwoodchurch.org. Refreshments and reception to follow at the church. In lieu of flowers, please consider donating to the Salvation Army of Texas.

Kathleen Ann Talsma (nee Grater) passed away surrounded by her loving family at her home on February 12, 2021. Kathleen was born on February 29, 1944 in Cincinnati, Ohio to Richard and Vera Grater (nee Kollman). The middle daughter of three... View Obituary & Service Information

The family of Kathleen Ann Talsma created this Life Tributes page to make it easy to share your memories.

Kathleen Ann Talsma (nee Grater) passed away surrounded by her...