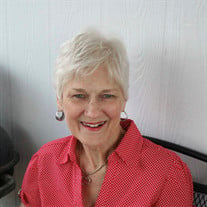 Katherine “Jane” Collins of Bedford, Texas passed away peacefully on May 31, 2022, surrounded by her husband and her 5 children at the age of 89. Jane was born in Fort Payne, Alabama on October 28, 1932. She resided most of her young life in Enterprise, Alabama, where her father was the pastor of First Baptist Church. Being raised in a Christian household, she gave her life to Christ at an early age and dedicated her life to His service. She graduated from Coffee County High School in 1951 and from Baylor University in 1955 with a degree in music education. On June 6, 1955, she married the love of her life, Stephen Collins of Houston, Texas. During their 67 blessed years of marriage, Jane and Stephen were given 5 children. She considered her family to be her greatest ministry and was a godly wife and mother. Serving the Lord, Jane participated in many activities including opening her home to establish a Baptist mission in a pioneer area of Vincennes, Indiana now Ridgecrest Baptist Church. In addition to starting churches, she was active in WMU, Sunday school classes and college ministries, Sunday school leadership teams, choirs, Kids Beach Club, juvenile prison ministry, and various other ministries. One of her greatest passions in life was music, and she enjoyed playing both organ and piano for worship services and for her children’s high school choirs. She was a talented musician who instilled the love of music in her children. Following 2 strokes, her tenacity and resilience never ceased, and she consistently worked to regain her abilities and independence. Stephen was by her side throughout her recovery always encouraging her and helping her to achieve an astounding recovery including playing piano for her Sunday school department until her death. Jane was not only beautiful on the outside, but she possessed an inner beauty and exuded God’s love and kindness. Despite being a natural leader, she didn’t want to be in charge. She was often found near the center of activity but hated to be the center of attention. When asked to describe her, her loved ones said she was servant hearted, sweet spirited, kind, and compassionate, organized and well planned, people centered, genuine, and had much integrity. Anyone who met her can attest to the truth of this. Despite the rural location, dust, and bugs one of her greatest joys was going to their cabin just west of Alpine, Texas at Paisano Baptist Encampment because her soul was able to catch up with her body. She enjoyed playing 42, visiting with her children and grandchildren, attending worship services, taking scenic drives in the mountains, and viewing the stars at night. These times kept her coming back. She was preceded in death by her parents, Brady and Kate Justice, and her brothers, Brady and Edward Justice. Survivors include her husband Stephen, her daughter Nancy Hill and husband David, her daughter Becky Hyde and husband Jeff, her daughter Ruth Barnes and husband Garry, her son Stephen Collins Jr. and his wife Lisa, and her daughter Cynthia Kinney and husband Chuck, her 16 grandchildren: Cameron Gibson, Brian Gibson, Catherine Gibson and husband Kristian Hernandez, Jeffrey Hyde and wife Tori, Michael Hyde and wife Leigh Ann, JD Hill and wife Bianca, Amanda Warder and husband John, Stephen Collins III and wife Kinsey, Mark Hill and wife Jess, Scott Hill, Hannah Jacobs and husband Kevin, Amy Kinney, Annie Hill, Sarah Collins, Gracie Kinney, and Wesley Kinney, her 7 great grandchildren: Slade and Lynnlee Collins, Nate Hyde, Trey Hyde, Ella Jane Jacobs, Leon Hernandez Gibson, Ezra Hill, sisters-in-law: Ruth Wilkerson and Sandra Justice, and many nieces and nephews. She is also survived by Brandon Barnes, his wife Amber, their 3 children, and Brooke Barnes. Her body will be available for viewing beginning at 2 p.m. and funeral services will follow at 3 p.m. Friday June 10, 2022, in the chapel at Cross City Church in Euless, TX. The family will receive friends immediately following the service. In lieu of flowers, the family encourages giving to Paisano Baptist Encampment (P.O. Box 973, Alpine, TX 79831) or Kids Beach Club (P.O. Box 635, Euless, TX 76039), two ministries which Jane loved dearly. It would be her greatest desire for all to know Jesus as their Lord and Savior and to faithfully follow Him. “On Friday, June 10, 2022 at 3:00 pm, a Live Stream of Jane's Celebration of Life will be viewable here https://boxcast.tv/view/jane-collins-celebration-of-life-vepqrpb03eiemkhn9zos

Send flowers to the Collins family.