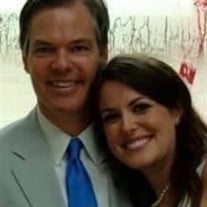 Joseph Patrick Tillotson passed away due to prostate cancer on April 22, 2021 at his home in Southlake Texas, surrounded by his family at the age of 53. Joe turned the months he was initially given to live into years when first diagnosed, allowing him extra time to spend with his family and live life in every way to its fullest. Joe was born in Houston, Texas on June 11, 1967, the fourth of five sons to John and Sylvia Tillotson. Joe was proud of his Texas heritage. He was a 7th generation Texan, descended from the Texas statesman Jose Antonio Navarro, a signer of the Texas Declaration of Independence and the Texas Constitution. Joe spent his early boyhood years in El Paso, Texas before moving to Dallas with his family in 1976. Joe attended Forest Meadow Junior High and then followed the footsteps of his father and brothers to Jesuit College Preparatory School in Dallas. Jesuit shaped much of who Joe was to become as a man and he believed in and worked towards the Jesuit ideal of becoming a "Man for Others." At Jesuit, Joe was a stand-out high school athlete, excelling in football and basketball, and earning numerous awards and honors. Joe attended and graduated from Dartmouth College, where he was recruited to play basketball. While at Dartmouth, Joe lettered in basketball, became a Rockefeller Scholar, interned in Washington DC for the Speaker of the House, wrote for the student newspaper, and received a B.A. in Economics in 1990. He was also a member of the Beta Theta Pi Fraternity. Most importantly, he created lifelong friendships at Dartmouth. The family greatly appreciates the support of those many friends who visited and supported Joe during his final months. It meant everything to him. Joe began his professional career as an entrepreneur in 1992, while also completing his MBA at Southern Methodist University. He was a founder and co-founder of numerous businesses, including restaurants and bars, financial, and real estate services. Some of Joe's many professional accomplishments include The Barley House, Banditos Tex-Mex, Katy Trail Ice House, Bryan Street Tavern, Redfield's Tavern, Defeaseit Commercial Loan Services, Your Home Base VRBO, and Lite-Heavy Commercial Disinfection Services. Joe was a true entrepreneur, bringing ideas to fruition. He was a master at creating spaces where people were drawn to be together. He was frequently among the first to open a business in a developing area and he excitedly took on those challenges. His contributions to his beloved Dallas will last far beyond his life. Joe was also a consummate sports fan and attended many of the greatest sporting events accompanied by his many friends. While Joe enjoyed his professional career, it was the people in his life that were his passion. Joe was a devoted son who admired and took pride in his parents. He was also a loving brother. Joe was the greatest husband. He found joy in being married to his favorite person as they took on life together. Joe's children were truly the light of his life. He was a patient, kind father and he delighted in each of his kids. Joe was a fierce friend. He leaves decades of great stories and wonderful memories. Although Joe's time was cut short, the love and hope he inspired endures. He gave regularly without hesitation. Whether it was an organization or an individual in need, his generosity was humble and quiet, but an integral part of his character. He was particularly passionate about Jesuit, Dartmouth, The American Ireland Fund, and Camp Sweeney, a camp for children with Type 1 Diabetes, attended by his son. Joe is survived by his wife, love of his life and biggest fan, Mary Katherine "Katy" Tillotson, their six adored children, Avi, Kennedy, Lauren, Amelia, Patrick and Bullock, his parents, John and Sylvia Tillotson, his four brothers and their wives, John and Andrea Tillotson (and son Baker), James and Tracy Tillotson (and children Jessica, Daniel, Melissa and Rachel), Jeffrey and Dara Tillotson, Jerome Tillotson and Rebecca Sandison (and son Callum), Buddy Cramer who was more of a brother than a friend, Mother and Father in-law Marty and David Colley, Father-in-law Bruce Duncan, sister and brothers in-law Elise Young (and children Laura Lee and Jake), Chris Colley (and children Christopher and Nazareth), and Brian and Julia Colley. In addition, Joe is survived by many extended family members and friends that truly meant the world to him. Special thanks to Dr. Chu Luu, Dr. Russel Pachynski and Dr. Ali Vadelayman who navigated Joe's many treatments and gave him hope. Gratitude to Dr. Brianna Nation who cared for Joe and provided comfort when treatment became unavailable. Joe's family is forever grateful for the prayers and support from the community, specifically the Jesuit, Ursuline and St. Monica families, Dartmouth friends, the Southlake "Dragon" community, Oh Look Performing Arts Center friends, the many friends from Children's Medical Center in Dallas and Plano, and everyone that prayed and hoped throughout this journey. A funeral Mass for Joe will be celebrated at St. Monica Catholic Church in Dallas on Saturday, May 1st at 12:00pm. Joe will be interred at Restland Cemetery following the rites. In lieu of flowers, donations may be made to Jesuit College Preparatory in the name of the John R. Tillotson scholarship fund. A livestream of the funeral mass celebrating Joe's life can be viewed at the link below. http://www.youtube.com/c/stmonicacatholicchurch

Joseph Patrick Tillotson passed away due to prostate cancer on April 22, 2021 at his home in Southlake Texas, surrounded by his family at the age of 53. Joe turned the months he was initially given to live into years when first diagnosed, allowing... View Obituary & Service Information

Joseph Patrick Tillotson passed away due to prostate cancer on...

Send flowers to the TIllotson family.