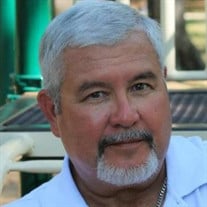 Joseph Gerald Carlos Laverty, also known lovingly as Jerry and Carlos, 61, from Bedford, Texas, passed away Monday, March 8th, 2021. Jerry was born in Ottawa, Canada on September 23rd, 1959 to Jerry and Carmen Laverty. He graduated from Andress High School in El Paso, Texas in 1977, and then shortly after joined the Navy where he served from 1977 until his retirement as a Master at Arms First Class in September 1995. Jerry was very proud of his military service. Some of his locations that he served were White Sands Missile Base, the USS Longbeach, the USS Mars, Joint Reserve Base NRB Fort Worth and Naval Air Station Dallas, and he was in Operation Desert Storm. After his military career, Jerry returned to college and earned his Bachelor’s Degree in Criminal Justice from Columbia College. Jerry was married to Julie Laverty on March 17, 2001, they were just 2 weeks shy of celebrating their 20th wedding anniversary. Together they blended their family and built a life together. They enjoyed riding the Harley, fishing, traveling, and cherished the time spent with family and friends for our Sunday family dinners and family gatherings. Jerry was the Street and Drainage Superintendent for the City of Bedford. He worked for the City of Bedford for over 20 years working his way through the organization, in each Public Works division, learning every aspect of the job. He was known for being extremely likeable and a great leader and friend to everyone. He was an active community service member, always volunteering his time in any way he could. He was such a selfless man; always wanting to make sure everyone else was taken care of before himself. Jerry was preceded in death by his father Jerry Laverty, father-in-law Frederick Nichols, brother-in-law Greg Nichols, and granddaughter Iola Laverty. Jerry is survived by his wife Julie Laverty and their children and extended family; Shannon Laverty, Rosanna Laverty (Juan), Corey Laverty, Melissa Johnson (Chris), Danny Dixon (Victoria), Sarah Dixon and Kevin O’Dell (Rachel) as well as their eight grandchildren, Jason, Riley, Trinity, Gerald, Carys, Kenzie, Genesis and Camryn. He is also survived by his mother Carmen Laverty, sisters Donna Laverty Thomas (Don) and Carrie Pinson (Michael), brother Dale Laverty (Kim), nieces and nephews, as well as countless other family and friends. He also leaves behind his two beloved English Bulldogs, Sophie and Maxx. A private burial will take place at DFW National Cemetery. The entire Laverty family wishes to thank you for all your thoughts, prayers, and friendship that have been extended during this difficult time. The family ask that mask be worn to the Memorial Service. “On Monday, March 29, 2021 at 10:00 a.m. a Live Stream of Joseph Laverty's Memorial Service will be viewable here https://video.ibm.com/channel/23847896/video/6qrkyx

Send flowers to the Laverty family.