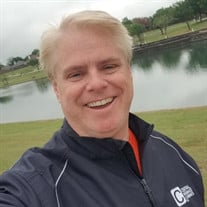 Jonathan Christopher Rolf of Watauga, Texas….let’s just stop right there! He would hate this already. If he heard his full name he would instantly think he was in trouble. And let’s be honest, he probably was. So let’s do this his way. On June 2, 2021 Jon was at home working, as usual, when God tapped him on the shoulder and said “ Dude, you’re coming home” . Jon, being Jon, tried to tell God he was too busy taking care of his family to go right now. God laughed and said “I have already put in place the people who your wife of almost 30 years Marilyn will need to get her through. For your daughter Jessica and grandson Jonah you already I have sent a great man into her life to pick up where you left off. As for your Son Andrew I have blessed him with a wonderful girl and friends to be there for him. They will all be ok”. Jon still has more to say, of course, worried about the rest of his family. So God tells him “ Jon your parents Dave & Jeanette have your brothers David and Steve and they all have Jennifer to take care of them. So everything will be fine. Like I said, `` Dude you’re coming home with me now.” And although it was unexpected Jon could not say no. Jon did many things in his too short time here on this spinning sphere of wonder. He loved his family and friends immensely. He would give anyone who needed it the shirt off of his back even if he needed the shirt himself. He had a very tight knit group of friends that even after 40+ years with a phone call anyone of them would be there for each other. He loved music and stupid movies, especially movies you could quote. He also was a huge Star Trek fan, I think he had to be since he had a scar on the left side of chest that looked like a communicator. He met and married the love of his life all within a few short months. That was almost 30 years ago. Next month they would have celebrated their 30th anniversary together. And they said it wouldn’t last! They proved everyone wrong. Jon and Marilyn have two wonderful kids and have made great family memories over the years. Everything from going to the big trees to traditional milestones like First jobs, which he kept the first paycheck stubs for them, to high school graduations and even grandchildren. Among Jon’s many accomplishments he Graduated from Point Loma Nazarene College with a Bachelor of Arts and continued his education at the University of Phoenix getting his Masters in Business Administration. Jon worked in the insurance industry for many years but he had also been a Schoolteacher as well as a Youth Pastor. His unexpected journey home has left a hole in many lives and hearts but in the words of Joe Dirt... You got to keep on keeping on. Life‘s a garden, dig it! This is a celebration of Jon’s life and the family is requesting that you wear something joyful. Hawaiian shirts were his favorite so keep that in mind when dressing for the day. Thank you in advance for celebrating Jon with us. Celebration of Jon's Life will be held at 11 am, Saturday, June12, 2021 at Center Point Church, 7804 Mid Cities Blvd., North Richland Hills, Texas 76180.

Jonathan Christopher Rolf of Watauga, Texas&#8230;.let&#8217;s just stop right there! He would hate this already. If he heard his full name he would instantly think he was in trouble. And let&#8217;s be honest, he probably was. So let&#8217;s... View Obituary & Service Information

The family of Jonathan Christopher Rolf created this Life Tributes page to make it easy to share your memories.