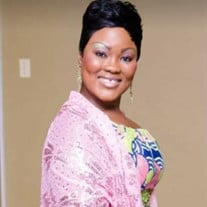 Johnette Vawar-Todey of Haslet, Texas, passed away Monday, March 15th, 2021 surrounded by her loving family. Johnette was born in Monrovia, Liberia on January 2nd, 1974, to the union of John B. and Bertha K. Vawar Sr. of Paynesville, Monrovia. Johnette began her elementary education at St. Peter’s Lutheran School on 14th street in Monrovia and later Rick’s Institute from 1987 to 1990 before Liberia was plunged into a brutal civil war in the early ‘90s. Undeterred by the civil unrest surrounding the greater part of her nation, Johnette matriculated to the College of West Africa (CWA) in the latter part of 1990 and was privileged to both continue her high school education and graduate from CWA in 1992. In 1994, Johnette emigrated to the United States and began building her life and career amongst other ethnic immigrants from her native Liberia. In addition to being a diligent wife and loving mother of three, Johnette was also a determined woman who never stopped finding ways to progress and succeed in life as an individual. After several years of working and attending school simultaneously, Johnette graduated from Dallas Baptist University in June of 2010 (the School of Applied Health Sciences) with a distinguished degree (Bachelor's) in Health Care Management. She worked for Grifols Biomat Plasma Center from 2008 until her passing on March 15, 2021. Johnette was married to the love of her life, Donald Gleplay Todey, and was blessed with 3 incredible children. Johnette is preceded in death by her father, the late John B. Vawar Sr. and a shortlist of relatives. She is survived by her husband, Mr. Donald Gleplay Todey; her mother, Bertha Kolubo Vawar; her children, Erica Korto Adjoa Nimely, Donnette Destiney Todey and Nylongrace Jehmu Todey; siblings, Wellington Morris, Beverly Omejia, Jerome Vawar, Matiah Greene, Eugene T. Washington, Segbeh Golanyon, and John B. Vawar Jr. May her soul and the souls of the faithfully departed continue to rest in perpetual peace and tranquility, in hope of our Lord’s return and of the resurrection unto life everlasting. Amen!

Johnette Vawar-Todey of Haslet, Texas, passed away Monday, March 15th, 2021 surrounded by her loving family. Johnette was born in Monrovia, Liberia on January 2nd, 1974, to the union of John B. and Bertha K. Vawar Sr. of Paynesville, Monrovia.... View Obituary & Service Information

Send flowers to the Todey family.