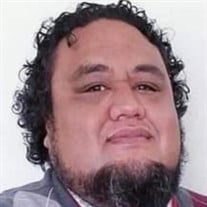 John Vi Jr, music artist and entertainer, concluded his mortal life and returned to his Heavenly Father on September 8, 2021. John is survived by his wife, Mataele Vi, son Sione Loloa Vi the 3rd, mother Ana Vimahi, sisters Elisiva Anderson, Olini Fotu, and Julia Bishop, brother David Vi, nieces Shayna, Marianne, Kristen, Ana, Tava, Maile, Ofa, nephews Ilaisa, AJ, Tevita, Tuha, Filimone, Nifai and grand nephew Niklaus. John was born Januray 21, 1978 in Honolulu, Hawaii to Sione Loloa Vi and Ana Nomani Liu. He graduated from Trinity High School in 1997 and went on to serve a two-year mission in Tennesee and Kentucky for the Church of Jesus Christ of Latter-Day Saints. From 1999 to 2008 John became a master of many trades while working as an apprentice to his father. In addition to the skilled work of his hands, John developed into an iconic DJ and lyricist. When John’s late father passed, he took on the role of father to his nieces and helped his sister and mother provide a loving home for these “three little birds”. When John wasn’t working on a job you could find him perfecting his rhymes and beats. His best lines won the heart of his eternal love whom he married February 17, 2012. Together, John and Mataele worked as a dynamic duo on his contracted work and were never apart. John and Mataele’s hearts were knitted in love and pain as they endured the loss from three pregnancies in the early years of their marriage. Joining American Airlines as a Fleet Agent in December of 2014, John had plans to travel the world with his wife in hopes of healing their hearts with new adventures. Their most recent adventure began when they welcomed their son Sione Loloa into the world on May 11, 2019. John was well known as a “gentle giant” and a friend to many. He had a quiet way of making a huge impact wherever he went. His title of “favorite uncle” never retired even after the birth of his son and he continued using his hands to build a better life for his immediate and extended family every chance he was given. John was a major support to his mother, a hero and mentor to his younger brother, a helpmeet to his older sister and a comfort to his younger sister. He often had a master plan to execute which he did not always share, even with his family, until time for the “big reveal”. As John drew his last breath on the morning of September 8th, his family knew he had another master plan which he needed to complete before the “big reveal”. He is sure to be found on the other side of the veil, building a Heavenly home for his bride & son, with their three older children at his side. John’s legacy of humility, hard work, eloquence, vision, family, faith and creativity will continue to live on in the work and music he leaves behind.

The family of John Vi created this Life Tributes page to make it easy to share your memories.

Send flowers to the Vi family.