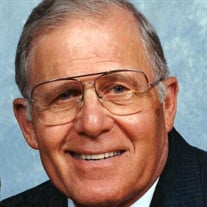 John William “Dub” Stewart, 92, passed away and went to be with the Lord on Monday, February 1, 2021. Graveside Service: Saturday, February 13, 2021 at 11:00 a.m. at Dicey Cemetery in Weatherford, Texas. Dub was born on Sept. 20, 1928 in Keller, Texas to Spencer and Leora Stewart. He moved to Haltom City in the 1930s and attended Birdville Schools. He graduated from Birdville High School in 1947. After graduating high school, Dub attended Arlington State College, now UTA, for one year before transferring to Weatherford College to play football. At Weatherford College, he lettered and was the team captain of the football and basketball teams. He met the love of his life, Lanona Hartness, in classes at Weatherford. Dub always had the biggest grin on his face when he would share the story of presenting flowers to the homecoming queen, Lanona, and giving her a kiss, much to the disapproval of his current girlfriend at the time. After Weatherford College, Dub served in the United States Army in Korea attaining the rank of Sargent. Dub played semi-pro baseball for one year in the Brooklyn Dodgers farm club. After the Army, Dub and Lanona married in 1952 and began their teaching and coaching careers in Millsap and Weatherford ISD. In 1960, as part of the first coaching staff at Richland High School, Dub was hired to coach football and baseball. Besides teaching, coaching and mentoring thousands of young men and women, one of Dub's proudest moments was the birth of his twin sons, Stan and Steve Stewart. Dub Stewart retired in 1986 from Richland High School and began playing senior softball until he was 80. Dub and Lanona began traveling in their RV to softball games and with grandchildren. Dub attended St. Luke United Methodist Church in Haltom City for 60 years; his Upper Room class was where he met lifelong friends. Dub was preceded in death by his beloved wife, Lanona, his parents, brother Arthur Wayne Stewart and sister Betty Mumford. Survivors: Cherished memories are left in the hearts of his sons: Stan (Debbie), Steve (Cheryl), his sister, Anita Ringener (Dairrel), his sister-in-laws Sue Casey (David) and Ruth Ann Hartness. Five grandchildren Blair (Amanda), Rachel (Rhett) Ashley (Jody), Stefanie Stewart, and Amberly (Ernesto). Six great- grandchildren, Ethan, Addisyn, Brianna, Jayce, Evelyn, Beau and Brekken. The family wishes to extend their gratitude to Meadowlakes Retirement Center and Brookdale Assisted Living for their love and care for Dub. In lieu of flowers, the family requests donations to St. Luke United Methodist Church, Haltom City, or a favorite charity.

The family of John William "Dub" Stewart created this Life Tributes page to make it easy to share your memories.