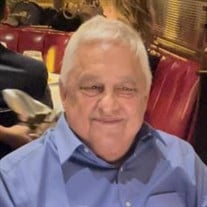 John Homer Kaspar, 70, of Keller, Texas passed away on Monday, June 21, 2021. The world has lost a very kind soul. John was born on April 21, 1951, to John E. Kaspar and Maude Huffstutler Kaspar in Chicago, Illinois. The family moved to Dallas, Texas when John was 12 years old. He graduated from Thomas Jefferson High in 1969, where he developed several life-long friendships. After graduation, he began working on a lighting crew for Showco, in Dallas, where he setup lighting for national rock bands whose names you would likely know. Family and friends enjoyed listening to stories about his life and times on the road. Later he formed his own company, Kaspar Delivery Systems. Mounting health issues forced him to retire much earlier than expected. In 1997, he met Jain Delanois, his best friend and the love of his life. They went on to raise 4 Labrador Retrievers, Old Man JD, Samantha (Sami), Jack and Baby JD, who survives. All who new John marveled at his unique sense of humor. Even through his darkest times, John would manage to put a smile on your face or cause rolling on the floor laughter. He never met a stranger and always found the good in people. He had an almost spiritual connection with the land and all its creatures. Some of his best times were spent in Estes Park Colorado, hiking and exploring Rocky Mountain National Park. John was a master at wood smoking on the grill and a BBQ aficionado. On summer holidays John would invite the neighbors over and fire up the smoker. These were epic good times. John has gone on to join his parents and sister Penny Kaspar Smith. He is survived by his spouse, Jain Delanois, sister Pat (Guy) Martin, nephews David (Dana) Martin, Peter Martin, niece Jacquelyn (Kevin) Martin Fanciulli and numerous great nieces and nephews. The family is in the process of planning a Celebration of Life, to be held at a later date.

The family of John Homer Kaspar created this Life Tributes page to make it easy to share your memories.

John Homer Kaspar, 70, of Keller, Texas passed away on Monday,...

Send flowers to the Kaspar family.