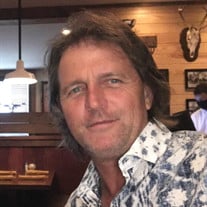 John Kerry Huckaba, age 59, moved to his heavenly home Thursday night August 26, 2021. Kerry touched many lives in the time God gave him here. He was born April 27,1962 in Dallas, Texas to Johnny and Virginia Huckaba, and grew up in Irving, Texas. Kerry was always full of life even as a child. He ran track and he excelled in art in middle and high school. He graduated from Nimitz High School in Irving. Kerry worked for his Dad’s business, Huckaba Fence & Contracting through high school. Kerry accepted Jesus Christ as his Savior as a boy. He was raised by Godly parents, and was rooted in Godly living, the truth in God’s Word and service to others. Kerry’s upbringing helped shape him into what he was-- a hard-working, honest man that strived to walk uprightly; looked to God’s Word for answers; helped people in need; and treated people right. Music was a huge part of Kerry’s life growing up, instilled in him by his Dad’s love of music, and ultimately a part of God’s plan for his life. He taught himself to play bass guitar as a pre-teen, joining his Dad’s family southern gospel group, “The Spiritual Sounds,” as a bass player. Kerry joined his dad Johnny Huckaba, siblings Regina, Brett and Shereen, along with dear friend Joyce Miles traveling weekends to sing the gospel. The group name later became known as The Huckaba Family. Kerry began his journey as a professional musician moving to Sheridan, Arkansas to travel with gospel group, The Mid-South Boys, for several years. He then played bass guitar for The Concords of Sheridan, Arkansas for a short time. Kerry received a call from Kenny Hinson to come to Nashville to try out for the original Hinsons, one of southern gospel’s premier groups. He was hired, moved to Nashville and spent many years traveling with the Hinsons, until their retirement. While traveling with The Hinsons, Kerry met the love of his life Teri Lewis of Edmond, Oklahoma. They married February 10, 1990. They started their life together living in Irving, Texas, later moving to Hurst, Texas. They enjoyed life together, blessed with precious son Caleb and beautiful daughter Jessica. They attended Grace Church in Arlington, Texas for 20 years and in recent years attended Gateway Church in Southlake, Texas. They had a busy life with Kerry playing around Texas in church staff worship bands, for various artists, events, and oprys; and his work playing studio sessions. The Hinsons contacted Kerry to return with them for their reunion “One More Hallelujah” national tour. Following that tour, Kerry was hired as bass player for Christian Country group White River of Missouri. Kerry’s humble spirit and excellent musicianship caused him to be loved everywhere he went. He was respected and loved by fellow musicians and singers in the southern gospel music industry, and he was admired by southern gospel fans everywhere for his friendliness and his talent. Following his time with White River, Kerry continued playing studio sessions, serving in church worship bands, and playing in stage performances with countless Texas music artists. After his Dad’s passing, Kerry became owner of a fencing business, also doing remodeling work. Kerry did excellent work, was loved by his clients, and his skilled handiwork can be found many places. Kerry treasured family gatherings and had a great sense of humor and a loud laugh his family loved. He cherished all the group members and bandmates he traveled with over the years, fellow musicians and artists he worked with, his extended family in Alabama, and his childhood church family and friends everywhere. He will always be remembered, not only as a gifted musician, but for his kindness, being a great friend, and his love for God and his family. Kerry was preceded in death by his Dad, Johnny Huckaba; his grandparents Charlie and Nora Huckaba and Francis and Cora McBride; his father-in-law and mother-in-law Bill and Jean Lewis and sister-in-law Debra Young. Those left to cherish Kerry’s memory are his wife Teri Lewis Huckaba of Hurst, Texas, son Caleb Huckaba and wife Kayla of Grapevine Texas, daughter Jessica Huckaba - Harding and husband Zach of Haslet, Texas, mother Virginia McBride Huckaba of Irving, sister Regina Huckaba Bestul and husband Ricky of Paris, Texas, brother Brett Huckaba and wife Samantha of Caddo Mills, Texas, sister Shereen Huckaba King and husband Chris of Rockwall, Texas, sister-in-law Linda Brooks and husband David Brooks of Yukon, Oklahoma, sister-in-law Vickie Lewis and husband Gordon of Edmond, Oklahoma and Joann Stupansky and husband Rich of St. Petersburg, Florida, grandchildren Reagan Huckaba and Emma Huckaba of Haslet, Texas and Brayden Brazelton of Grapevine, Texas, as well as a host of aunts, uncles, nephews, nieces, cousins and countless friends loved as family. Kerry had a beautiful, meaningful life here and is now having a beautiful life in Heaven. His life here made the world a better place. Kerry will always be remembered by those that loved him. The Huckaba Family will receive friends at Lucas Funeral Home in Hurst Texas from 6:00 pm to 8:00 p.m. Friday, September 3. The funeral service will be held at 11:00 am Saturday, September 4 at Lovers Lane United Methodist Church, Asbury Sanctuary, in Dallas, Texas. Rev. David Brooks will be officiating. To view the funeral online please visit https://www.Llumc.org/kerryhuckaba

John Kerry Huckaba, age 59, moved to his heavenly home Thursday night August 26, 2021. Kerry touched many lives in the time God gave him here. He was born April 27,1962 in Dallas, Texas to Johnny and Virginia Huckaba, and grew up in Irving,... View Obituary & Service Information

Send flowers to the Huckaba family.