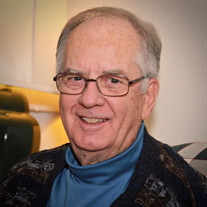 John Franklin Hatfield, age 79, passed away on Friday, July 2, 2021 in Richardson, Texas. Service: A chapel service will be held at 2:00 PM on Thursday, July 8, 2021 at Lucas Funeral Home in Keller, Texas. Click here to watch the Recorded Service. John was born January 3, 1942 in Oklahoma City, Oklahoma to the late Alva Hatfield and Ruby (Sallaska) Hatfield. The family eventually moved to Enid, OK where he played golf, became a “soda jerk” at the local drug store, and eventually moved on to Cliff’s camera shop where his lifelong love of photography was cultivated. John also enjoyed music, playing trombone in the band, and taking piano lessons from Mrs. Evelyn Seem. It just so happened he found another love through music and it would end up being the love of his life. Quinda, Mrs. Seem's daughter, was best friends with John’s beloved sister Chere. Chere introduced John to Quinda at a high school party where they would share a dance together. That dance would lead to a marriage of 56 years, two kids, two grandkids, and a life filled with joy and happiness. John had a distinguished career in engineering and a brilliant mind. He received a degree in Electrical Engineering at Oklahoma State University and spent his career designing circuits, managing and inspiring his teams, and continuously pursuing knowledge. He was especially proud of his time at Motorola where he finished out his career. After retiring from Motorola, John stayed busy for years doing contract software development and mechanical engineering work in between rounds of golf. Golf was his real focus, however, as he loved anything having to do with the game. In his most recent years, he would report back on his outing and proudly proclaim, “I shot my age today!”. He also loved to read, write, attend church, and spend time with his family and lifelong church friends, the “CoWaHaSu” group. His stories and laughter will be deeply missed, but rest assured he is now enjoying the best round of golf. John was preceded in death by his parents. He is survived by his wife, Quinda Seem Hatfield; daughter, Cynthia Kermes; son, Jeff Hatfield and wife Debbie; grandchildren, Renee Perry and husband Mark Perry, and Michael Kermes; sister, Chere Ruester and husband Bill Ruester; nieces, Suzanne Peterson, Melissa Seem, Patricia Hollis, and Stephanie Fulmer; and nephew, Bill Ruester. In lieu of flowers, the family has requested donations be made to: PSC Partners Seeking a Cure: www.pscpartners.org Juvenile Diabetes Research Foundation: www.jdrf.org

The family of John Franklin Hatfield created this Life Tributes page to make it easy to share your memories.

Send flowers to the Hatfield family.