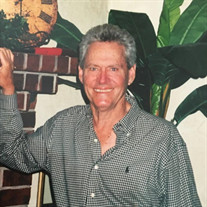 JOHN FLOYD 1936-2021 Click here to watch the Recorded Service. John (Fly) Scales Floyd, formerly of Amarillo, passed away August 31, 2021. John was born September 29, 1936, in Paris, TX. His family moved to Hays, KS where John was raised and grew into a star athlete. It was in western Kansas that his lifelong passion for sports, fishing and hunting began. After graduating from Hays H.S. in 1955, John followed in his brother Bob’s footsteps- and his parents followed little Johnny- as he attended Texas Christian University. It was at TCU where his passion for golf started and he met and married Judy Casburn. John and Judy had 3 beautiful daughters, who all live in the DFW area. Tracey Noonan & husband Tom, Leann Brumley & husband Patrick, and Cinda McDonald & Chris. In 1975 John married the LOVE of his life, Carol Lamb. John and Carol loved to dance (two-step), have fun with friends, and travel across Texas, Oklahoma, and Kansas “peddling insurance”. After leaving TCU John became a successful insurance agent. When he wasn’t selling, he was either golfing with his buddies in Amarillo (or anyone he met along the way), hunting, or fishing. The Fly never met a stranger and had more friends than stars in the sky. He has now joined his parents, B.R. (Bob) and Mildred Floyd, brother Bob Floyd, and sister Sarah Boone in Heaven. John leaves behind 6 incredible grand children: Stefan, Blake, Grant, Kassie, Brendan and Pierce, along with 2 great grandchildren, Mackelyn and Tripp Fly, you will always have the honors on the 1st tee. The quail will always be plentiful, and the fish will always be biting. The celebration of life will be held at Lucas Funeral Home, Keller TX @ 2:00 pm on September 9, 2021.

The family of John Scales Floyd created this Life Tributes page to make it easy to share your memories.

Send flowers to the Floyd family.